The Economy of Energy 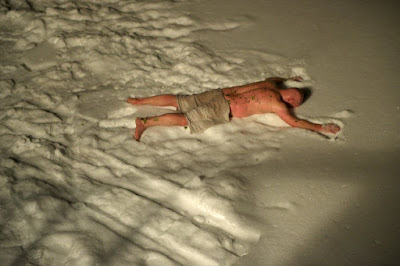 I'm at a restaurant the other evening with a large crowd of people. I don't know most of them; they're friends of my friend. Crowds are not my thing; nor do I enjoy eating with other people. I consider fleeing. I have to go, uh, take care of something. But I'm there to support my beautiful friend so decide to stay.

Once I commit, my anxiety begins to wane. The thing about anxiety is that it's an energy suck. Sure, I'm just sitting there doing nothing. But, inside, I am careening. I can feel it in my veins and muscles and it's draining me. But decision made, I relax my sphincter and my internal churning — and hence my energy spend.

This crowd, though all over 45, is worked up and loud. Not me. I'm quiet. Indeed, for one of the first times in my life, I am the quiet guy at the table.

At some point, a man across the table begins to talk to me about his kid's school. He has nothing in particular to say; his delivery is as banal as his tale. As we're sitting at a table, I can't save myself by just walking away. Trapped, I consider my options.

Now, in the past, I'd turn to my go-to: go in head first, teeth bared, words and nose and hands and ideas flailing with an umph considerably more than emphatic. Why? To entertain myself. To break this temporary prison of banality. I'd do it all the time in classrooms and seminars, at parties, at casual stop-and-chats. I'd stir shit up with a hint of bile, an obnoxious smile, and a profound indifference.

I'll tell you, I started into this guy. Well, if I may poke at this for a moment...I began as I leaned forward. But not even a full sentence into my attack, I stopped myself. I just didn't have the energy. Or whatever energy I did have, I wanted to preserve for my friends and my lover. And, jeez, who the fuck cares? So I changed direction mid-stream — adjusting my tone, removing the umph, relaxing back into my seat, and adding perhaps and so I suppose I could see to my now neutered tirade.

The older I get, the more I understand expenditure. When I was 24, pumped up on coffee and cigarettes, sitting in a grad seminar with a bunch of anxious grad students, I held nothing back. I was a fury. At 48, I just don't have the same reserves. I have to choose when and where to spend what I have. And sitting at this dinner table with this man who was nice enough was not one of those times. I had nothing interesting to say and no will to say it. And so, in what I deem as a radical gesture, I became the boring guy.

I think of Nietzsche's soldier in the snow who, to preserve his waning energy, lies perfectly still — perhaps unto his death but done not as suicide but as survival. Nietzsche calls this Russian Fatalism:

Russian fatalism, that fatalism without revolt which is exemplified by a Russian soldier who, finding a campaign too strenuous, finally lies down in the snow. No longer to accept anything at all, no longer to take anything, no longer to absorb anything—to cease reacting altogether. This fatalism is not always merely the courage to die; it can also preserve life under the most perilous conditions by reducing the metabolism, slowing it down, as a kind of will to hibernate.

For Nietzsche, such is life: it is the distribution of energy, its accumulation and expenditure. This is how he assesses life — not with moral codes or aesthetic judgement but by the energy created or demanded by one's actions:

Nothing burns one up faster than the affects of ressentiment. Anger, pathological vulnerability, impotent lust for revenge, thirst for revenge, poison-mixing in any sense—no reaction could be more disadvantageous for the exhausted: such affects involve a rapid consumption of nervous energy, a pathological increase of harmful excretions…

Here we see Nietzsche express a thought we find in Jesus, namely, turning the other cheek. But if for Jesus this is because we should love our neighbors even when they've wronged us, for Nietzsche the matter is much more practical: revenge and resentment drain one's energy, one's vitality.

As I get older, I make sense of my time and activities by the energy involved. I love going to the ocean. As both Merleau-Ponty and Osho say, what we see enters us. So when I look over the vast, seething expanse, that infinite horizon rushes into me, through me, expanding me. I am vitalized.

But, at the same time, the ocean exhausts. The wind, the relentlessly surging waves, the dark depths: they evacuate me. I was told by someone ages ago not to do qiqong by the ocean; it'll wash your energy away. So if I'm writing well or in a certain social groove, I am careful to avoid the ocean as it's like an existential enema, cleaning me right out. On the other hand, if I'm mired in my all-too-human nonsense, the ocean's seething indifference and infinite expanse is a welcome cleanse.

Then there's the sun. Georges Bataille, who takes up Nietzsche's energetics, sees the sun as a continual ejaculation, giving everything in its path its seed. Plants eat it all up, taking in all that energy and growing. Me, I'm no plant; the sun drains me. Which is why even just an hour at the beach leaves me mere husk, the sun and waves sucking all the life out of me.

Few actions are simple accumulation or expenditure. In The Accursed Share, Bataille performs economic analysis of what he calls the general economy which includes finance but also sex, food, desire, the sun — the constant giving and taking that is life, the economy of energy. Sleep might come the closest to being pure accumulation. But I, for one, sometimes wake exhausted by my sleep! Anyway, the point is action is a transaction, a giving and taking.

When I'd go on a tirade in a seminar, I'd expend energy, of course. But I'd take the ideas that came out of this explosion as fuel for future thought that would sustain me, enliven me, drive me. Indeed, at times I've lived on little more than ideas, whiskey, and ramen. Ideas can spur, make one's heart go pitter patter, speed up the blood, generate internal cyclones.

Sex is one of the more complex economic transactions. Take oral sex. When I'm performing, I am no doubt expending my energy. But, if I perform well, I take in much more energy than I'm giving out. And, by the end, she's usually exhausted and I'm rearing to go.

Intercourse — I use that word rather than, say, fucking as I like the economic implications — is a veritable micro-physics of energy transaction, a constant giving and taking at every turn and thrust, a fueling that's an expenditure and vice versa. It's more subtle and complex than who's on top as energy flows from more than the hips: it oozes from eyes and breath, from fingertips and nipples and toes and skin.

I've spent much of my life performing. That may sound obvious as life is always a performance. But I mean it in the more specific sense of putting on a show. I surely did it when I was teaching; I'd call it the Jew Clown show — prancing, ranting, alluding, joking, screaming, pacing. At the end of my lectures, I often couldn't speak, my voice gone, my will depleted. I did the same in most social settings, holding forth, feeling some compulsion to be the loudest, smartest, funniest, crudest person in the room (in my own eyes, mind you). Oy! Just writing that now exhausts me! My ego was killing me.

These days, I'm more reserved, paying keen attention to how I spend my energy — and where I take it in. When I was younger, I'd drink like a fiend at night — which seemed like I was fueling up. Hey! Listen to me! I got something else to say about Deleuze! This bourbon is giving me so much energy! And then I'd feel shitty the whole next day. What a terrible economic decision! Sure, sometimes it was worth the spend. But usually it was a lousy move. So now I do all my drinking before dinner; I never have hangovers anymore. Oh, and I drink tequila or gin, booze that is more energetically generous. Yes, I still love whisky. But it's a night cap.

I do the same with my food and drugs: I negotiate the entire transaction from decision to consumption to experience to the next day or two or three. Certain food and drugs give a few hours of delight and insight then demand days of sleep. This can be a good transaction. But it all depends. It's not simply a matter of not wanting to spend. That'd be what we call miserly. No, it's a matter of making a propitious economic decision in Bataille's sense of the general economy: What do I give? What do I get? I'll gladly give up three days to sluggishness and sleep for the eight to 12 hours of a great acid trip that shows me new ways of going or affords ridiculous delight.

In any case, these days I keep my energy more and more to myself, choosing to spend it on those close to me. Perhaps that means people think I'm boring. So what? I'm playing the long game in this general economy.
By Daniel Coffeen at May 04, 2018