The drift of Terrence Malick's The New World 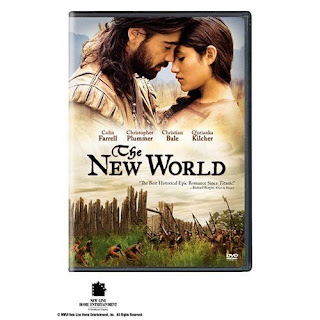 I just watched The New World this morning and was about to dismiss it when I began to realize how odd a film it is. And then I realized that Terrence Malick is all about drift. That's what The New World is: a love story, historical events, but it's all drifts. These are not character who determine their own actions. And yet neither are they absolutely determined by forces that exceed them. Rather, they are at once constituent and constitutive of the forces; they are forces just as they succumb to forces. They make their worlds but not in a direct fashion; everything just sort of slides along. He is forced to go back to England: Is it against his wishes? Perhaps yes, perhaps no. He goes without a fight—his leaving is a non-climax, a fact, tragic maybe but not lingered over, not indulged; he is nudged along, putting their love quite literally adrift on the ocean. She is exiled, it seems, for choosing to love a white man. And yet she doesn't choose; neither does he; they are both at the mercy of love, of lust, pushed this way and that, pushing this way and that.

Of course, at the end, she seems to make a choice. But it is neither climactic nor anticlimactic as the narrative moves laterally away from its apogee, from its narrative consummation. Her one presumably clear choice, then, is precisely what puts the narrative, the film, firmly in the drift. She goes here, she goes there; she goes where she goes, forging a world, being forged. She is on a most unexpected path, making history just as history makes her. This is why the great artist Dan Tierney says that the drift is heroic: you make your way as you slide.

Malick's film never privileges any one moment. There is no dramaturgic rising and falling; things don't build and come to a head. But neither does the film meander. Every moment is poignant, every shot an indulgence, each as exquisite as the others—all the while the ocean's waves lap at their play, all the while, things happen. The Indians want to push the British out to the sea; the British want to move inland. It is not a battle that ever comes to a head but one that moves back and forth. This is drift: a relentless movement without a purpose but always productive, making its way.

And yet the film returns to trees. It is in fact the final shot, the camera gazing up through the tall trees, toward the sky. But just as much as the camera and the film move upwards, aspiring for the sky, they move sideways, along the ocean, playing in the leaves of grass.

And this—this move towards a point, its inevitable lateral slide, and the heroic manner in which one stands towards this play—is drift, is Malick's film.
By Daniel Coffeen at March 29, 2007 3 comments: