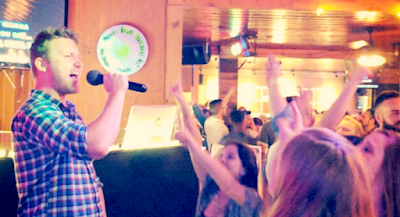 Karaoke enacts an complex set of relations between the personal and the public. When the performer takes the stage, she play acts being the celebrity she's singing: she puts on Lana Del Rey. At the same time, the whole thing is a charade we're all in on. Of course she's not Lana Del Rey. And yet, when she's up there, she does "own the stage" and becomes a celebrity within this environment, in this bar. Meanwhile, everyone believes that she could in fact be the next Lana Del Rey. That's what "American Idol" and "The Voice" are all about: stars are everywhere just waiting to be found! So her celebrity began before she even walked into karaoke night. The line between identity and image — between who you are and how you appear — blurs.

Instagram accelerates this karaoke effect. Everyone is mugging for the camera like J Lo (that's a thing, right?) or a smoky model because anyone and everyone could be J Lo or smoky model. And, in fact, by posting on Instagram, she becomes a celebrity. After all, there is nothing exclusive about the platform. I post on the damn thing! Of course, I don't post moody shots of myself. But look at basically every account of anyone under, say, 33 and they all are doing the same thing: post after post of themselves performing some kind of mood.

These pictures are not an expression of how they're feeling. They are the production of an identity. The image is not a medium the poster uses to express herself; the image does not mediate between her and the world. For this new world, this new generation, this new technology infrastructure — what McLuhan would call this new environment — the camera has always already been recording. There is not first you, then your phone, then Instagram. Like Neo, you were born inside Instagram, always already being recorded, always already performing for the camera. You're no longer putting on Lana Del Rey: you're putting on yourself. The image is the site of identity.

Louis Althusser says ideology hails you. Someone calls out, Hey, Coffeen, and I answer. Before we're born, ideology hails our gender and personhood. We don't come to the world pure beings; we come to the world hailed. We are enmeshed in all sorts of rituals that we think are ours but are in fact performances of the ideological state apparatus. But this operation of what Althusser calls interpellation still keeps the apparatus fundamentally outside of you. Today, that's no longer the case: we are now wired into the apparatus from the get go, are constitutive of this new image-identity-machine, continuous with its mechanics. We don't use the machine to express ourselves; we are elements, cogs, within the image-machine.

But like Althusser's interpellation, Debord's society of the spectacle adheres to a distinction between the human and the image. "The spectacle is not a collection of images," he writes, "rather, it is a social relation among people, mediated by images." That is to say, for Debord, the image is still something separate from identity that has the power to mediate our emotional experiences and interpersonal relations. Just think of his title, The Society of the Spectacle: it still believes in an architecture of perception that keeps image and identity apart — it's a spectacle, something to be seen. But as the artist Marc Lafia has argued, we don't live in a society of the spectacle: we live in a society of the performative in which we are all always already mugging for the camera.

In the society of the spectacle, media and commodity fetishism infiltrate us. In the society of karaoke, we are the media. We are no longer infiltrated. We perform! Your Facebook feed is a movie you're making that is the commodity — that is your identity! You now perform for the machine, as the machine, making movies of yourself. Our identities are produced, reproduced, and indexed by an always-on, always recording, always playing back image-machine we call the internet. We perform for it, as it. There is no outside, no spectacle to witness.

Instagram and Facebook erase the line that separates the personal and the public, the everyday and the celebrity, the audience and the stage, the human and the commodity. It's not Warhol's claim that everyone will be world-famous for 15 minutes. That suggests there's one stage we all take turns occupying. But there is no longer a stage. In the internet, everywhere is already a stage, every computer the center of the web, and everyone's personal life a commodified performance.

In the society of karaoke, your life is the product. You are tracked everywhere go. Your ever action is recorded, becoming a movie that is you, which is then bought and sold along with the gadgets and tchotchkes of the world. There is no longer a turning away from the spectacle. There is no outside, not even a desert of the real, and certainly no Eden to proffer relief. Our very lives are our performance. There is no slinking off stage to hide quietly in the shadows. You're already on stage.
By Daniel Coffeen at September 18, 2018 2 comments:

Why a machine? Why any concept, for that matter? (podcast)

Often, when I get excited about an idea — Nietzsche's amor fati, Kierkegaard's knight of faith, Deleuze's fold, and now Guattari's machine — I am often met with a certain confusion by those around me. Their instinct is that whatever I'm saying is "academic" and hence of no real interest.

Believe me, I understand such a reaction. But I believe it's an instinct that's been bred by a certain ideology that makes new, strange sounding ideas suspect. The fact is we deploy concepts all the time in how we make sense of the world, of ourselves, our relationships. Ego, the unconscious, freedom, evolution, religion are all concepts that we just take for granted as true things. But they're concepts that were created and perpetually recast — except when we just assume they're true and so never question them.

Concepts are art but, like, really pervasive art in that they inflect everything we see. Sure, seeing a Van Gogh might have you re-seeing the viscosity of the atmosphere. But a concept like the ego has you rethinking yourself and the motivations of everyone all the time.

Concepts aren't true or not true. They can work in that they can explain. They can jibe with you. They may not jibe or explain but they can be beautiful, odd, exhilarating. Long before Maturana's "autopoisesis" began to work for me, it sure exhilarated me!