Let's say I want to tell you, explain to you, that we live inside of a series of ever emergent feedback loops —as the artist, theorist, and teacher, Allison Holt does (if you'll excuse this temporary reduction of her complex, thoroughly fleshed out position). Or, rather, I want to explain to you that it's not really that you live inside these ever emergent feedback loops — as if you were living, say, in some underwater hotel — but that you are at once constituted by and constitutive of these loops. You are not a guest at that hotel; you're built into its very structure.

Well, I could tell you as I just did. But here's the thing: written language really wants to move in a straight line. Look at these sentences. They move left to right, assembling sense as they go more or less like a factory assembly line. So when I tell you that you are always already living amid, and indeed as, feedback loops, I do so in a straight line, belying my very pedagogic intent.

How will you understand non-linearity if all you ever hear is linearity? You'll walk away, thinking me a fool. Or, worse, you'll think what I said is cool, a novelty, and hence feel no need to pursue its effects, its logic, its ability to rewrite you and the world around you. Ah, but if you experience it at the same time, the effects will resound unto infinity.

No doubt, language is never solely linear. In fact, as Jacques Derrida and so many others have shown us, language always goes astray—it bleeds, proliferates, sprawls in different directions whether you want it to or not. Derrida enjoyed this play of language, creating a mode of reading he called deconstruction which seeks to amplify the drift inherent to any utterance. A long litany of writers have made language move in all kinds of ways, forging new modes of sense that will never have been linear — William Burroughs, Kathy Acker, Douglas Kearney, Lisa Robertson. The list goes on and on.

But, most of the time, these writers don't explain the play of language: they perform it. That is, as their writing folds and winds, you can go along for the ride. But if you don't get it, you'll jump off before it gets very far. (I no longer recommend Burroughs unless I have a keen sense of the reader.) How, then, can someone explain the non-linearity of life without straightening out the kinks or being so kinky that all explanation frays and evaporates? How can you walk the talk of feedback loops while, at the same time, talking the walk?

Enter Allison Holt and her astounding video, "Stitching the Future with Clues" (2021). In 14 minutes and 30 seconds, she at once explains and performs the recursive nature of existence. She does this as she's always done throughout her practice: by operating at the junctures where clear distinctions between telling and doing, science and art, knowledge and performance give way to a much richer medium—and hence a more resonant pedagogy.

Throughout the video, Holt deploys a breadth of tactics—words, animations, images, graphs, lights, sounds. We could say the art "uses" and "incorporates" documentary and science. This, in fact, is the very premise of the film: life is an ever-emerging set of dialogues and conversations between systems of every sort—human, vegetal, cosmic, conceptual, linguistic, microbial. The film, then, is a conversation between science, art, and (for lack of a better description) ethical philosophy. It at once argues, shows, and preaches. No one mode is subservient to another. Rather, they conspire together, a network of sense-making modes conversing with each other. 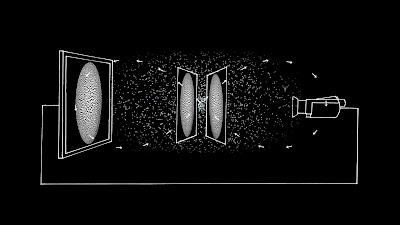 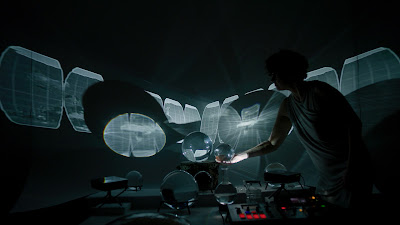 No doubt, the film talks to us, explaining to us in a linear fashion. Within the film, however, the words are one system, one register and mode of sense making, in conversation with images, diagrams, sound, and performance, which have their own modes of sense making. Just as McLuhan and Quentin Fiore disrupt and refuse any hierarchy between words and images in their Medium is the Massage, Holt's piece places these modes of sense making into a state of play where they mutually inflect each other.
I hate to use the word I'm about to use but I believe Holt's piece, and her work in general, is important. Why? Because it breaks down the false barriers that keep knowledge siloed and experience a secondary, rather than primary, function of knowing. Art and science remain disparate at their own peril. Their intertwining, which takes up qualitative experience alongside the go-to quantitative will of science and mathematics, promises us the very universe itself. Only by bringing these two into conversation do we begin to glimpse the profound, exquisite complexity of knowledge, of the universe, of life. In "Stitching the Future with Clues," Holt has done nothing less than lay the basis for a new mode of knowing—perhaps just in the nick of time.

The Art of Affect in Film

I talk about Spencer, Inherent Vice, the films of Sofia Coppola and John Cassavetes — and more! The affect of film is not the affect of its characters or story; characters become inhuman affective forces.....