When my son was around 10 (he's now 16), he started a YouTube channel dedicated to aliens and the ensuing cover up(s) by various governments. I like that he had this concerted focus, all these folders which he labeled, all these diagrams (at 16, he knows no such order, or focus, any more). But I was confused by his desire to have a YouTube channel. Where'd he even come up with such a thing?

At the time, he was watching lots of YouTube videos, sure, but it was one that seized his imagination: PewDiePie. I have no desire to get into the saga around this guy. My point is: my son was attracted to the number of followers and views this channel had. And, of course, by the money this PewDiePie earned from Google. Both views and money were staggering. Frankly, while I was a bit intrigued, I was mostly confused — and bored by it all. And so I didn't think about my boy's desire again.

And then he and I both started using Spotify. We have vastly different tastes in music but we still swap songs, trying to impress or engage the other, to read the other's taste (a great exercise in reading another's way in the world). One thing my son often comments on is the number of streams a given song has. 27 million streams, Dad? That's the real thing.

These comments threw me off. I come from a culture where it was cool to find and be obsessed with the band that had, like, seven listeners. If something was popular, it became hard to like — and it surely meant you had to defend it. Oh, I liked Dire Straits way before "Brothers in Arms." The drive of my cultural cohorts was to be plugged into an alternate world, one where capitalism and suburban bourgeois bullshit was not the dominant force. I can still picture driving across the country and continuously turning that radio dial ever so finely down the left side, seeking out those obscure college stations that played the songs no one knew. We were literally trying to tune into an obscure cultural flow.

That's just not the case with the kids today. They're all about plugging into the vast interconnected engine of commerce, taste, and collective discourse. To wit, my kid recently decided he wanted a polo shirt. This struck me as funny as that's what preppies wore when I was in middle school in the early 80s, collar up. So I bought him one — sans logo. He thanked me, of course, then went out and bought one with the Polo logo on it. Silly dad.

At first, I was deeply dismayed by all this. Here's this cool kid — quirky, funny, interesting — trying to plug into what I've always deemed the wasteland of culture, its vapid tastse, its mindless consumption, its utter banality. Don't you want the band no one has heard? I'd ask. He'd just look at me blankly across a vast generational chasm.

But then I realized that it's me who's lost his way as I find myself adrift in a mythos that's become obsolete. I come from a world that believes in an outside — outside the humdrum of bourgeois life, of capitalist drive, of the steady machinic drone. I am perhaps the last vestige of a world that can still imagine being unplugged, that aspires to be unplugged. When I close my eyes and picture peace come at least, I am Neo waking up in his pod, all those wires flying from his flesh in a great violent release.

I still revere Terence McKenna who wants nothing more than to break the reigns of culture with psychedelics. I still revere William Burroughs and the Beats who set up camp in North Africa to escape the madness of America. I still dream of Ginsberg and Kerouac careening through the same America in search of sex and drugs and near-God experiences, free of any tethers. I still love Jean-Luc Godard who never caved to any studio and David Lynch who tried but, alas, gave up to do his own thing. None of my close friends have any online presence. I alone remain the idiot in the crew who tweets and blogs, much to my embarrassment. Here's McKenna summarizing this world view:


“We have to create culture, don't watch TV, don't read magazines, don't even listen to NPR. Create your own roadshow. The nexus of space and time where you are now is the most immediate sector of your universe, and if you're worrying about Michael Jackson or Bill Clinton or somebody else, then you are disempowered, you're giving it all away to icons, icons which are maintained by an electronic media so that you want to dress like X or have lips like Y. This is shit-brained, this kind of thinking. That is all cultural diversion, and what is real is you and your friends and your associations, your highs, your orgasms, your hopes, your plans, your fears. And we are told 'no', we're unimportant, we're peripheral. 'Get a degree, get a job, get a this, get a that.' And then you're a player, you don't want to even play in that game. You want to reclaim your mind and get it out of the hands of the cultural engineers who want to turn you into a half-baked moron consuming all this trash that's being manufactured out of the bones of a dying world."

But that world is gone. There is no longer any outside. There's nowhere to go. Everything is plugged into one big matrix, the singularity, the heaving hive of human consciousness in which thought is controlled and surveilled at all times. Yes, psychedelics are back in vogue but they serve a vastly different function, a different imagination. If for Mckenna (and me) psychedelics are a radical break with the culture machine, today they're viewed as a means to "boost" creativity, focus, and that horror of the contemporary moment, productivity. Rather than being a way to untether, psychedelics have become a way to jack in all the better, all the more efficiently — to be an engineer of the culture machine just like Steve Jobs.

The kids these days never even consider an outside, never dream of being unplugged. On the contrary, they want their own YouTube channel! They want to wear the clothes, photograph themselves, then post it so everyone can see how plugged in they are. Browse Tinder and a shocking number of young people just want you to follow them on Instagram. They're not looking for dates, for company, or even for money: they want those likes and followers to quantify how plugged in they are.

If it were all about getting paid, I'd readily understand. I've never been part of a cultural imagination free of monetary concerns. No, I understand wanting to get paid — but so that I can unplug! So that I can stop interacting with all this nonsense, this noise, these screens, these ads, all this inanity, all this bile, all these great TV shows, all these decisions, all these frets and pleasures and pains. I don't want to browse Netflix, Hulu, and Prime for another fucking second. I don't want the relative sanity of Kanopy or the Criterion Channel which just add to the mayhem. I want to be free of it all! I want quiet! I want never to see that glow of blue light again! 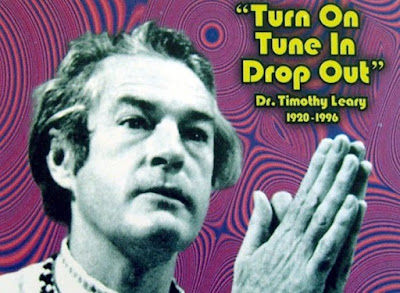 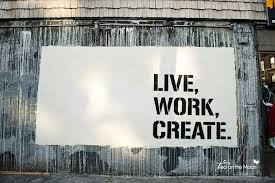 I grew up with Timothy Leary in my ear telling me to turn on, tune in, drop out. That falls on deaf ears today. In Williamsburg, there's a billboard declaring the new triple dictum: Live. Work. Create. The youth today yearn for participation in the engine — to work for the big brands or start their own. But it never occurs to them to drop out. Drop out from what? To where? This is an image that they can't imagine. They want to work.

I remember when Burning Man was all the buzz with my San Francisco friends. It was early internet days, maybe 1999. And while I had no interest in going — I'm a bit agoraphobic and misanthropic — I loved that it existed. Here, it seemed to me, was an extension of the mythos I'd grown up with, the myth of the outside.

Watching its growth over the years, I have a different take on it now. It was always a bit of the Carnivalesque in the Mikhail Bakhtin's sense of the word. Burning Man was a temporary overthrow of the reigning order, the introduction of play and chaos into the normal run of things. And like the Carnival of old, this was never intended to be revolutionary per se. Rather, Carnival functions as a temporary respite from the everyday not so as to overturn it but to restore it: we'll break the rules today so we can go back to the order of things.

Today, Burning Man is not about an outside and less about Carnival's temporary reversal of order than it is about the techno-colonization of the planet. If at one point Black Rock City was an outside, a remote place of freedom, today it's proof that we can wire anything anywhere, turn it into a gridded city, light it up, plug it into the internetworked matrix. Just look.


Mind you, despite my tone of anger and despair, I am not criticizing this new will to be plugged in. In fact, I'm more prone to critique my own imagination which is premised on a faulty, if seductive, metaphysics. Like McKenna and Leary, I imagine a place free of the bullshit. But we are of bullshit. There is no outside, no Garden of Eden, no unsullied place. The planet has been colonized, everyone jacked in thanks to the ubiquity of the smart phone.


The fact is my mythology of an outside has the whiff of nihilism — a will to the deep sleep. This desire to stop playing the game is actually a bit adolescent, a kind of tantrum in the face of reality. And while there is something depressing to me about these kids — about my kid — who want nothing more than to be jacked in, they live in the world as it is. The trick, for them, is not to escape the hegemony of the techno-global culture machine but to game it, to find their way in it, through it, to maximize their pleasure and reward (even if many of their attempts at pleasure are ill conceived).

In any case, once I recognized this dramatic shift in cultural mythos, in generational imaginations, it helped me understand my son and his cultural taste. Which made me realize how much of our conversations — political, economic, existential — are premised on how we imagine the world, what our mythos of the good life is, what challenges we believe exist.

As parents hailing from Gen X, we crave unplugging. But our kids live in a different world, a different imagination, in which our admonishments are, well, demented. Our kids are trying to create a good life within the machine precisely because there is no such thing as being unplugged. Think of what we tell our kids: Stop looking at your screens and go outside! But, for them, there is no outside.
By Daniel Coffeen at January 13, 2020 No comments:

When my son was around 10 (he's now 16), he started a YouTube channel dedicated to aliens and the ensuing cover up(s) by various governm...