Some Things About Being Multiple

A thing is one thing that is many things. It is an assemblage point — a gathering together of diverse elements in a particular way. A rock assembles earth, bone, leaf, sun, wind, rain, footstep, ant into a particular this: 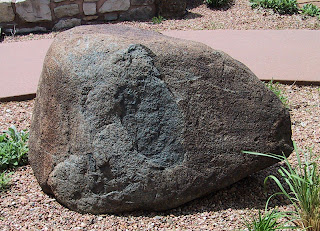 A rock assembles other things, as well — figures, memes, memories. A rock assembles foundation (as solid as a.....), stupidity (dumb as a....), and so on depending on its situation, its locale, its place in time.

What we say of a rock we can say of anything and everything, including a human being. A human being is as an assembling of flesh, blood, desire, rice noodles, rye whiskey, love, glances, bacteria, bile, phlegm, gas, ideas. The very particular way you or I assemble things is you or me (this is called one's style). 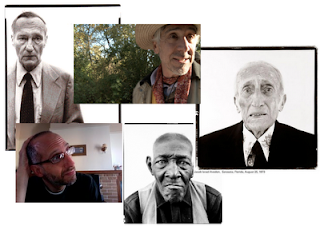 I'm not sure a rock or a person, though, is an assemblage point per se. A point sounds like it doesn't move. But rocks move. So do people. So does everything, even if very, very slowly.

As each thing moves — the rock, you, me, a cloud — it interacts with other things. Said interactions change the very make up of the rock, you, me, the cloud. To move through the world — in other words, to live (and die) — is not just to change but to constitute oneself and be constituted. This is all to say, you are not first something and then interact with the world — you are the very manner in which you interact with the world. And not just interact, but exchange — consume and emit.

It's not you are what you eat. It's: you are how you perceive.

A thing, then, is never done. You are not as much this: 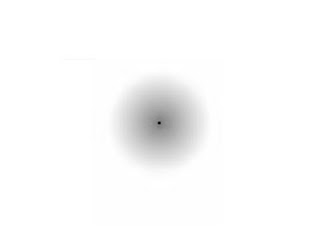 as you are this:

It's Whitman in Leaves of Grass — one of my great inspirations in life.

Emerson is: Our moods don't believe in each other. My other inspiration.

I've been giving the wrong guy credit for that quote for a while. Oops. I do love Emerson - he's sort of like the first American philosopher and he always feels more similar to the European thinkers I like than to any American tradition of philosophy. Though, I've found that people who call themselves "pragmatists" like to claim Emerson as one of their own.

And I'm sure you know about the Neitzsche/Emerson oversoul thing. I had a great professor sort of jokingly say that Europeans are always stealing our ideas and making them sound more complicated. No reason to be nationalistic about it, I guess, but it's still nice to think Emerson played a part in Nietzsche's thinking.

When I taught my class on joy, I'd open with Whitman and then move to Ecce Homo to show two modes of affirmation: Whitman's absolute Yes saying and Nietzsche's No-saying as Yes-saying. For instance, Whitman loves EVERYTHING — his appetite knows no bounds. Nietzsche, however, is very particular — no wine, no coffee, no British food, etc.

There are a bunch of great Americans — including the whole James Pragmatism thing. It's great to see it all — Whitman to Hegel to Frege to Buddha to Plato and so on — in play with each other.

This kid in my grad seminar on Leibniz once said he conceived of a monad as "kind of like a dandelion, you know? Once you blow away all the fuzzy little white things, there's nothing there."

Here's George Oppen in "On Being Numerous":

By the shipwreck
Of the singular

We have chosen the meaning
Of being numerous.'