How Pixar and Toy Story Got it All Wrong 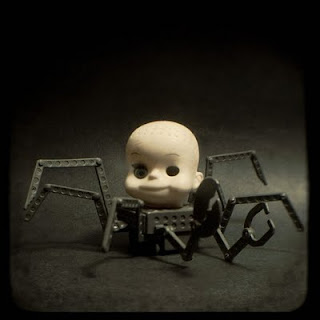 OK, I have to say this: the basic premise of Toy Story is creepy and so fundamentally wrong. (Yes, I've seen the film with my boy — twice. This is but just one of the many humiliations sustained in my role as dad.)

Sid — the supposed evil kid next door — may be kind of a dick but he's unbelievably creative. When he looks at a toy, he sees opportunity. He sees possibilities. A toy, to Sid, is a starting point to be shed quickly so he can get on with the act of creating. His toys are a database of gestures and tropes, figures and materials, to be manipulated this way and that.

Sid, my friends, is an artist.

And yet he is so cruelly vilified in the film. And what is Sid's crime? He plays with his toys passionately, creatively, interestingly. Andy, the pansy next door, does nothing but recapitulate Hollywood cliche when he plays — the cowboy, the superhero, love stories. Sid is popping off heads, sewing parts together, welding, melding, molding. Sid is a punk rock artiste.

What lesson is Pixar — which is really Disney — teaching our kids? That one should respect the integrity of commodities? That to toy — ahem — with the corporate prescribed rules is evil? That kids who dress in black and make art are the enemy? That the best way to play is to play it safe, within the stipulated norms set by Hollywood and Mattel?

I tell my son over and over: Sid is maligned. Sid is the real hero here. And I think I'm getting through. Yesterday, he asked me for a rocket so we could blow up some of his toys.

On Soft Architecture, via Lisa Robertson

We live in spaces and amongst things that are infused — with memory, mood, texture, tone, timbre, resonance. Buildings, roads, bridges: they are not hard and rigid but structured events, experiences lived all the way through, soft. This is soft architecture.

Design offers more than a spine; it offers — no, it is — an algorithm of possible experiences, combinations, folds, and juxtapositions.

Soft architecture turns the world inside out. Or, rather, it facilitates a space that dissolves, renders porous, that line that separates private from public, subject from object. As I enjoy a space, make my way through it, it enjoys me, makes its way through me. Together, we move and are moved. A building, a road, a sidewalk draw me to them and I draw them to me. Together, we make this world. Or: together, we are this world.

We don't unite, world and me; we marble. We are marbled.

And buy her astounding book here
By Daniel Coffeen at October 09, 2009 1 comment: