Schizo Sense: On the Space, Place, and Drape of the Image in Marc Lafia's "Making Sense"

I first encountered this body of work in his house. This is not in and of itself unusual. I've done plenty of studio visits over the years which are often in the artist's house, in a room set aside for that purpose.

But this was different. There was no studio. There was a large, long living room. The art, however, was not set up to be viewed per se. That is to say, most of my studio visits involve seeing art that has been arranged precisely to facilitate seeing, one image after another along a wall or floor so I can peruse the images one at a time. The space is immaterial, an afterthought at best; I'm there to see the images. It's as if the frames exclude their environment, letting me confront the image without hindrance.

But, in this case, the art was not displayed for this. It was everywhere — hanging from clothes lines that ran the length of the room at different angles; from windows; draped over couches, objects, paintings, chairs; and, when I could peek through the windows, I could see it lying over bushes and trees. 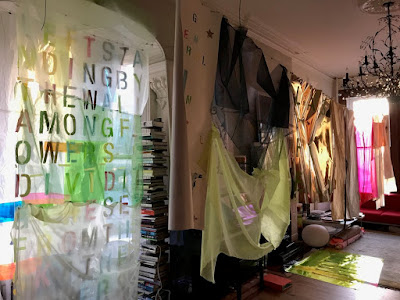 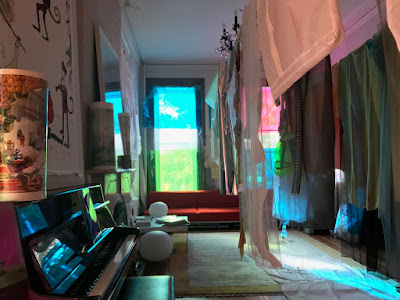 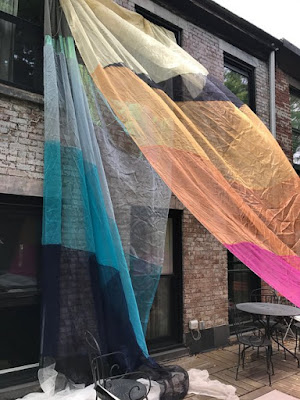 This is not art that one sees as much as one wears: we don't see it as much it drapes us. Drape is a term of fabric and, yes, this art is made predominantly of different fabrics. But when I say drape, I mean more than the mode of display: I mean the mode of engagement. A painting, photograph, or film usually privileges a certain relationship between object and eye: everything is about clearing lines of sight, illuminating the image just so in order to see it more clearly.

This art operates with a different relationship to vision, light, and the viewing body. The experience is not one of the eye taking in an image but of an affective body being draped in a certain ambience of light and material. Light, in this case, does not illuminate the image; on the contrary, light shifts the image itself. Mind you, it's not light art à la James Turrell in which the material facilitates an experience of seeing. For Turrell, the object is light which he hangs just so. Lafia's work does the opposite: it doesn't present light but insistently presents materials that metabolize light. If for Turrell, material serves light, for Lafia, light serves material.

This art, then, drapes us. It doesn't contain itself to the eye; it flows all around us. Its folds and pleats, its ridges and nudges, seem to make it sculptural but sculpture tends to reenact the architecture of painting: it is something to be seen. (I still can't believe that we're not allowed to climb Oldenburg's "Cupid's Span" here in SF. Seeing it is a bit banal; it wants to be touched, climbed, slid down. In Philly, we could climb on his "Split Button.") Lafia's work is of a different order: it is, at the very least, haptic — that is to say, sight and touch are entwined and, at times, even interchangeable. In any case, to see this art is to be draped in a sensual experience that at once palpates and is palpable. (The great French phenomenologist would call this a chiasm, an intertwining, articulated in the middle voice — neither active nor passive, both active and passive.)

One thing was clear to me immediately: there is no clarity as to what constitutes an image here. This is not an experience of discrete experiences; it is an experience of ever-shifting relationships. They may have stitches here and there but they are not framed. These works bleed, essentially. It is how they go. They can pick up and go elsewhere and find themselves comported in an absolutely new way — what was once on a clothes line may now be over a window, a bush, covering, filtering, and making new sense of something else. This work is not a series of works. Nor does any one piece have a definitive way to display itself. It's generous, willing and able to be here or there.

Over time, this bleed only intensified. When I revisited it a few weeks ago, it had begun to take up objects around it. The fabric no longer just lies there metabolizing light; it metabolizes other art and things, creating localized dramatic scenes. 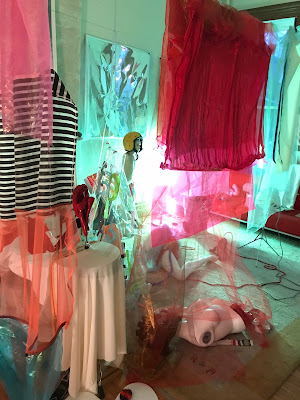 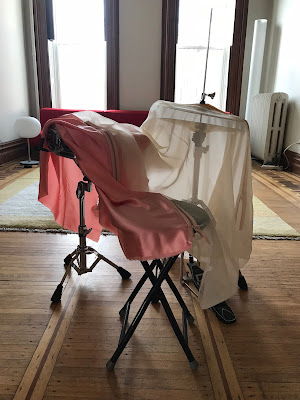 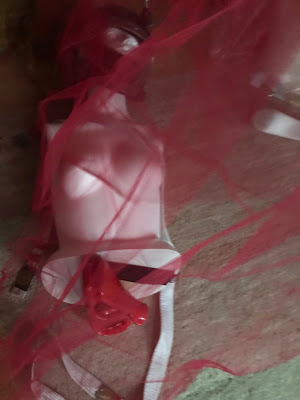 And all of it still in that large, long living room. One of the great effects of this space is that it's not always clear what's art and what isn't. That coat hung over the chair? Those rolls of paper in the corner? That old painting against the wall? In this environment, the line between art and everyday objects blurs. Which, frankly, is beautiful, calling to mind Niezsche on the Greco-Romans for whom everyday objects, and beliefs, were art as much as they were utility.

So when the curators of the 1GAP Gallery — at Grand Army Plaza, the glass and steel Richard Meier building on Prospect Park in Brooklyn — agreed to show this work, I wondered how they'd display it (I almost wrote "hung," which is telling: that is what galleries do — they hang art for the viewer's eyes). I imagined its vast glass walls lined with textures and fabrics, the space not just inhabited but ravaged by this work, this work that has a will to bleed. And that would no doubt be glorious.

But this gallery is interesting in that it occupies, and moves through, a residential building. Only the residence is not the artist's; it's occupied by owners and paying tenants, many of them with kids. And it's curated as a gallery that is, lest we forget, a seller of art. Both factors — residents with kids and objects to sell — call for a certain discretion. (The fact that these two factors align in their intention is not a coincidence, of course; both are bourgeois institutions. That said, kids themselves — as distinct from children as a socio-juridical entity — disrupt bourgeois propriety in such a glorious manner, espeically vis-à-vis art. When my own child was young, I usually kept him in line wherever we went as I enjoy quiet. But at museums, I'd encourage him to run wild. Such is my prejudice: I want art to be in, of, and as the everyday rather than as a special thing to be worshipped.)

The gallery had the odd task of turning this bleeding drape into discrete objects, works that could be hung alone, titled, and sold. And I have to say: it was fantastic. The individual objects, hung rather than draped, and then optimized for viewing are beautiful, engaging, hilarious. If I had walked in and seen the work just like this, each as one piece within a series, I'd have been astounded. (You can see more images of that show, which is up through the Summer, here.) 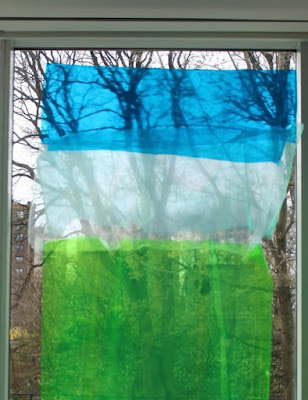 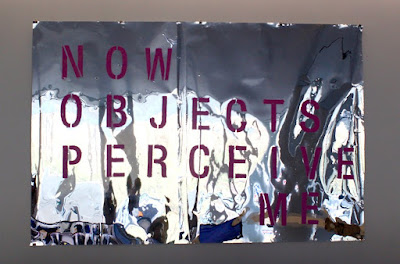 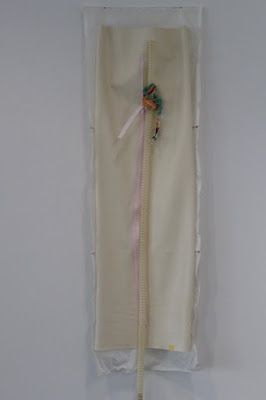 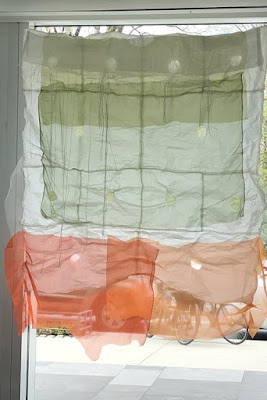 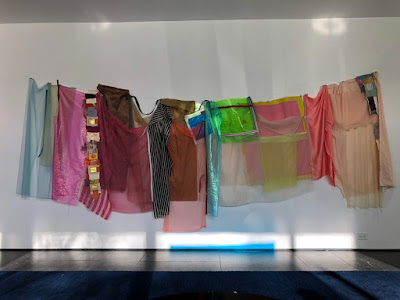 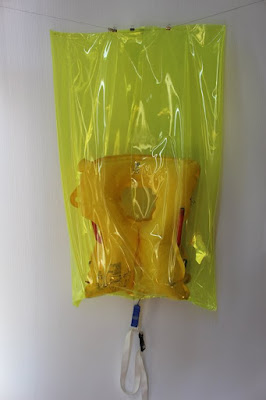 The gallery, needless to say, turned Lafia's work into "art" — into an institutional commodity, framed and poised for consumption. This institution is more than the gallery; it is the history of art, an engine of capital, academia, publishing, museums, collectors. Duchamps' "Fountain" only works because there is such a thing, an institution that is as much transactional (for buyers as well as viewers) as it is ideological and spatial. The curator in this case, Suzy Spence, had the difficult task of transforming Lafia's viral, schizophrenic work into something respectable and readily consumable. And she did an incredible job, choosing work that works in the windows, work that works on its own, work that is witty and has something to say within the discourse that is institutional art.

Unlike most people who will see this show, I've had the luxury of experiencing it in the two venues. And this affords me a distinct pleasure: I was able see this body without organs, as Deleuze would call it, become a presentable organism — a shapeless, shifting morass of color, texture, and affect become a refined yet witty conversationalist. And so now I see it in both states at the same time, a body that keeps shifting its posture in such fundamental ways while somehow remaining recognizable — the funky underwear slipping out of the tuxedo pants while the tuxedo sits comfortably amid the drape of silk, plastic, neoprene, rubber, latex, and paper. Back and forth this work goes, always becoming, always becoming other to itself in the very act of its actualization.
By Daniel Coffeen at May 09, 2018