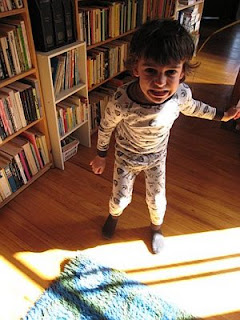 My son likes to wrestle: "Let's have a battle, Dad," he screams as he runs full speed into my legs, belly, butt, swinging his tight, bony little fists. This happens often. It is a deliriously complex exchange:

1. The play is a competition, the young male trying to outdo the alpha male (it is the only instance when I am, in fact, an alpha male — and even that standing is precarious).

2. The play is an education as the alpha (me!) teaches the young beast how to wrangle, defend, attack. It is presumably in my best interest to make him able to defend himself so he can continue to carry on my genes and so he can hunt for the pack.

3. But simultaneously I am training him to beat me.

4. And yet when he senses that he can beat me, he backs off nervously. He wants his alpha to be strong and capable. And so the play seeks at once to confirm my position as king of the pack and to dethrone me.

5. There is, too, a beautiful madness, a delirium, to these battles as we heave, tickle, swat each other in a frenzy of laughs and snorts, a Dionysian release of a sort.

How am I to play my role? It is an ever shifting negotiation in which I sometimes let him win — whatever "win" means in this context—, sometimes dominating him mercilessly, sometimes showing pain (his bony little body hurts!), sometimes not. I am alternately defending my position, playing pedagogue, and putting the beast in his place.

Just this moment, he left for his capoeira class that I am paying for. I am funding my imminent demise.
By Daniel Coffeen at April 22, 2009 6 comments:

It is what it is, redux

In popular parlance, "it is what it is" tends to put an end to the discussion. It is uttered, everyone nods in their collective wisdom, and moves on because, well, such is life: it is what it is. The utterance is a call to irreducible difference—"it" is not categorical, there is no shared base of knowledge, and so we will not try to speak it.

And this is, probably, often the best response. Life happens. What is there to say about it?

And so, for me, I find those moments when it is, indeed, what it is a great provocation to speak, to write, to deploy language. I have neither hope nor desire that my language will name it, categorize it, grasp it. No, I want my language to move with this thing, with this life.

I want the difference of this world, those moments that beguile us, that tantalize and overwhelm and confound, to spawn more and more life. I don't want them to quiet life. I want them to amplify life. And so I speak, and I write, difference.
By Daniel Coffeen at April 20, 2009 2 comments:

It is what it is

Every communication succeeds, necessarily. You say something. I hear it, or don't. Someone else, perhaps, hears it, sort of. In any case, something happened.

But understanding is only one component of communication, albeit it important. (Needless to say, our respective understandings of understanding no doubt differ.) Understanding may be one moment within a communicative event that is itself an affective or effective machine — you understand what I say and, upon so doing, begin weeping or kissing or fleeing or punching.

But communication per se can't help but succeed. As they say, in a bit of popular phenomenological wisdom, it is what it is.
By Daniel Coffeen at April 19, 2009 No comments:

The Folds of Language

I have lived with Deleuze's fold for over a dozen years. At times, its power as a figure speaks to me immediately, eloquently.

I was drinking tequila with the good Dr. L Green the other evening as we were discussing how best to perform becoming. To render it visually seemed right and, at the risk of offense, easy. But to express it linguistically posed a completely different challenge: how to perform becoming without naming and yet still being in language which necessarily names.

This may be obvious. We may all know this already: language describes and does, at the same time but not necessarily in the same breath (to say I'm cool does not make me cool — an yet to say I'm cool does do something, is itself part and parcel of becoming). But, as I said, at certain times the power of this idea resonates with me, a harmonic convergence that makes my entire body vibrate.

Which is perhaps the point: the idea is folded through the body.

The descriptive power of language — the meta — folds into its own materiality — its performativity, yes, but also its palpability — to form a sense event that is at once meta and material. And that is precisely what that very idea does to me: I understand it, yes, but I experience it as well, the idea itself a sensual affect that does not efface the ideality of the idea.

If that makes sense.

To speak, to write, is to fold. Such is language. It does not first name and then perform. Nor does it perform and then name. Neither precedes the other; neither effaces the other. The meta and the material are folded in every inscription, in every utterance, in ever different ways, at every different angles.