Alien Love, or Let me Count the Ways "Spring Breakers" is Incredible 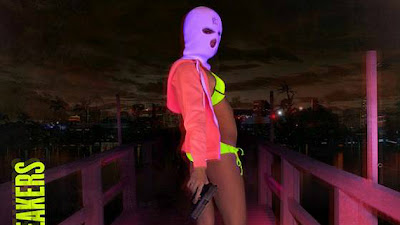 The set up is familiar: good girls flirt with bad, get in over their heads, learn a lesson — with some boobs and teen exploitation along the way. Think: Anne Hathaway in Havoc. But this is a shell and, finally, a dupe. For it will never have been such a tale. That was just a ruse to get in the front door of Hollywood: I'll look like them but I'll do something completely different. This is not your feel good, or even feel bad, movie.

Spring Breakers is film as delirium, a relentless barrage of images precariously connected to the things we know too well such as dialogue, character, and story. Harmony Korine is not the only delirious filmmaker — Terence Malick, of course, but also Cassavetes and Gaspar Noé, among others. Here, Korine takes up the storyline and slurs it, sloshes it about, before making it bend in whole new ways. Delirium inflects narrative, flow, and viewer identification leaving us nearly bludgeoned with a nasty beautiful pop sugar coma.

But it's not the sweet coma of girls in bikinis. This is not an exploitation film per se; you will not get a hard on. No, it's not the sweetness of flesh but the confection of the image. This movie is fall down gorgeous.

The movie conspicuously folds time with flickers of foreshadow and snippets of conversation that repeat throughout. We hear words and see scenes but only sometimes are the two in sync. These moves let us know that this is not a linear story of character progression, not a tall tale or fairy tale. It is an experience.

But it does not abandon a tale all together — this is not Gummo. Just as Malick uses delirium to have the story of Pocahontas drift sideways, Korine deploys delirium to send the story in a different direction, into different stories: from teen party to Scarface gangster to love.

For much of the first part of the movie, we are privy to Faith, the Selena Gomez character, a good girl who goes to church but also wants a different life elsewhere. She, it seems, is our point of identification, our safe harbor amidst the impending chaos and sin of her so-called friends. She is not cut in to the water gun armed robbery that pays for the trip. 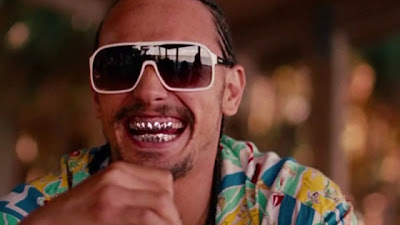 And then, when things begin to get really weird and creepy — when the shining beacon of James Franco's Alien grill bails them out of jail and introduces them to his self-proclaimed gangsta world — Faith leaves. The scene in the bar between Faith and Alien is terrifying: Should she be scared? Should we be scared? Or is the party just beginning? Which is to say, it's not scary because Alien is scary: it's scary because we don't know how scary he is. Either way, she's sure as shit in over her head and you can feel her relief when she gets out of there. I've read reviewers that say they wish they'd left with her (they of little faith, alas).

And that, of course, is Korine's point: he has our point of identification in the film literally leave the picture. She gets on a bus and we don't see her again. She was never the center of the film just as we, as viewers, were never the center.

Think of Ray Liotta in Goodfellas: Henry Hill is the relative good guy amidst the madness. He's our safe way into the sickness. Or take Jules (Sam Jackson) and Vincent (Travolta) in Pulp Fiction, or Django, for that matter. They are put ons. When Jules puts a bullet in Flock of Seagulls, we are not afraid — this is all a put on.

But Korine doesn't give us that safety. In fact, he takes it from us. This is delirium and we are swirling in it. How scary is Franco's Alien? Is he gonna rape these girls? The film and Franco do an incredible job of maintaining that tension without ever resolving it. And, as viewers, safety has disappeared — including our safety of knowing the limits of these characters and of this film. Most bullshit Hollywood movies set up the bad guys and broadcast to us when they're being evil. Not here. This film gives us a nastiness we are not used to in our movies. We are in the muck of an alien world in which we don't know the limits. Spring break forever, indeed.

(Frankly, we should not be surprised that Faith was never the place for us. We hear her conversation with her grandmother over and over and, well, it's insane. I want to come here with you, Grandma, she says — here being a teeming bastion of collegiate breasts, beer, drugs, sex, dementia. This Faith is an odd bird.)

So Faith leaves and then things get interesting. The three remaining girls — Brit, Candy, and in a way, Cotty — fall in love with Alien. And Alien, in one of the more amazing psychosexual scenes you'll ever see, falls in love with them. This is not a morality tale but a fucking love story!

I kept waiting for this to be a story of good girls in over their heads. But that was never the case. In the beginning of the film, we see the girls rob a restaurant silently as we peer through the window — an exquisite scene, as if we're watching a video game. Later, the film flashes back and takes us inside the restaurant where we see, hear, and feel the nastiness, the power, the force of these young women as they threaten to kill the patrons. These were never good girls who got in over their heads. These girls are post-bourgeois American power embodied — greedy, horny, nasty, pop, living inside a video game and loving it. They don't struggle with whether to stay or not. To them, it's obvious: this world is their world and always was.

Just as it is for Franco's Alien (that is his character's name) who, he tells us, was always bad. He never had time or taste for the square world. He shows us his shit with joy— his dope, his machine guns, his knives, his money — as he and the girls fall into the bed all lovey dovey. They are not using each other. No, they've found true love. I knew you girls was special...Let's cause some trouble...Spring break forever.

As the film fucks with our identification, as it has the story fold, drift, and turn from teen exploitation to gangster revenge with a love story thrown in, it teaches us to view films differently. Read reviews that hate the film and they all say the same thing: No character development, no story, nothing to identify with. But Korine doesn't want you to identify.  The film is not a story about something per se, (even if it takes up the contemporary American moment perfectly, even if documents the results of what the professor in the beginning of the film calls "the Second Reconstruction." Korine is, in a way, always making documentaries.) This film is an experience itself, a confrontation with the delirium of the image which is always other, always alien.

Spring Breakers asks us not to leave the film with Faith but to welcome the Alien that enters because that is where and how love takes place. Just like Brit and Candy do, we are asked to abandon ourselves and leap into the fray, amplify the madness. The film asks — no, it demands — that we leave our false faith behind and abandon ourselves to the ambiguous, ever morphing, always unsure image.

Spring Breakers is not a film that wants to confirm who you are. It wants to take you somewhere else, to a cinema of delirium where the image is a confrontation, not a representation. This film asks you to embrace this lack of certainty, this swirl, this madness: it asks you to love the alien.


A great interview with Korine about the film:

"I want to come here with you, Grandma, she says... This Faith is an odd bird."

Have you seen the film? It really is incredible. I'm still reeling.

I actually just did a podcast on Spring Breakers that covers similar territory, albeit w/less precision and more undergraddish rambling.