On Michel Houellebecq's The Elementary Particles 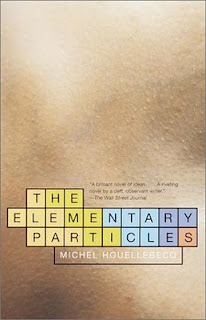 I love Houellebecq's The Elementary Particles — it's smart and hilarious and downright nasty. And I love the way Houellebecq deploys a vision throughout all his writing, a vision of the contemporary moment, how we got here and where we're going.

But what's so impressive to me about The Elementary Particles is the way Houellebecq moves so readily between the historical, the cultural, the biological, the chemical, the species, and the absolutely singular way of a character. Houellebecq's vision is vast and complex and sure. To wit:

"Bruno, however, found himself in a less auspicious position. While dominance and brutality are commonplace in the animal kingdom, among higher primates, notably the chimpanzee (Pan troglodytes), weaker animals suffer acts of gratuitous cruelty."

This is not a pyramid, a hierarchy. It's not as though the characters are stand-ins for the forces of nature or history; the characters are not examples per se. Rather, it's that we can't possibly separate the historical, the biologic, and the human: they are what make up this life. Humans are neither the realization of these forces nor agents capable of resistance. They go as they go, amidst the great teem of history and nature which itself is made up of an infinity of singular moments.

Hence, the elementary particles of the title.
By Daniel Coffeen at March 24, 2010 3 comments:

Television on _The Wire_

And the wire winds right into our homes –– the wire is television, that great, misunderstood medium. And once there, it opens up, flowers, extends itself. Most television programs take precise aim, delivering a particular product to a particular demographic. The shows are pat; the jokes and drama and characters canned. But not The Wire. The Wire , once inside the house, expands rather than contracts.....