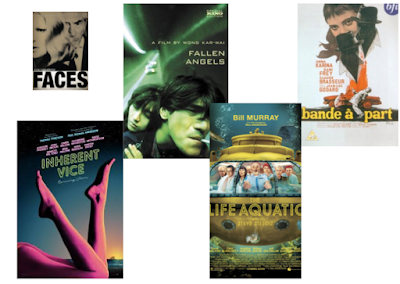 Other people often find this frustrating. But you said Band à  part was your favorite movie they challenge me as if they've caught me in a lie. Which always throws me off a bit. What's wrong with having multiple or even shifting favorites?

Well, favorite is presumably an absolute. Every time I offer a different favorite film, it must mean that either a) I've changed my mind — in which case I'm fickle; or b) I am insincere and that which I say is my favorite is, in fact, not. In either case, I am not to be trusted.

What confuses them is that I seem so sincere, so sure, so reasoned and impassioned in my declaration. How, then, do they reconcile these two things — my lack of trustworthiness and my apparent sincerity?

I've finally understood that this is particularly difficult for women with whom I share intimacy, women to whom I seem present and loving, women to whom I declare my love (well, the woman to whom I declare my love). I say Godard is the greatest filmmaker, then Tarantino is the greatest filmmaker, then Wong Kar Wai, then David Lynch, then Cassavetes, then Marc Lafia, then Bunuel....and she's left wondering: Oh, hmn, maybe he tells many women that she's his favorite!

The thing is, for me, absolutes are relative. Yes, that seems contradictory: an absolute is an absolute, fixed and sure, sitting steadfast on the ground, never budging. But when I look around, when I experience my world, I don't really see or feel or know a ground. I experience a world that is in motion all the way through, always and already.  As Bergson says, time (which is to say, motion) is not added to things; it is constitutive of them. Everything in the world, from the sub-atomic to the astronomically large, is not just changing but everything is shifting relations with everything else, a relentless reorienting of everything. Significance and meaning are not fixed; they're relational. As relations shift, so does significance and meaning. Of course. How could it be otherwise?

This is why Derrida liked crossing out the verb "to be." After all, if everything is always changing, how can anyone ever say something is anything? This seems particularly true of taste. If forced for some insane reason to declare my favorite food, I'd say steamed pork dumplings. But does that mean I always want dumplings? Of course not. My body desires different things at different times. I've eaten chicken salad sandwiches which were the greatest thing I'd ever eaten: my new favorite thing! Or a flourless chocolate cake! Oh, no, chocolate mousse with a shot of espresso over it from the old Ti Couz on San Francisco's 16th Street.

Reading what I just wrote, I sure sound fickle. And a women to whom I declared my undying love would certainly be justified in doubting my sincerity. If my favorites change as my body changes and my body is always changing, then it follows that I must change my favorite woman just as I change my favorite food.

But, for me, a favorite is something that saturates me. It is absolute in that it is at a limit of me: it permeates, thoroughly, even exhaustively. When I say Life Aquatic is my favorite film and then Chunking Express is my favorite film, both claims are absolute — but from my perspective of each. Or, rather, from the perspective of our mutual encounter. When I declare something a favorite, it's because that thing has run all the way through me, extended me, stretched me in some luscious and surprising way. For that's my favorite film to leave my mouth, it means an exquisite event has transpired: I've tasted the infinite — but not any ol' infinite, this infinite: the infinity of Life Aquatic, the infinity of Band à part, the infinity of Chungking Express. I have resonated through the cosmos with those films; they've inflected my becoming all the way and in just that way, the way particular to them. These films resonate just so with these vibratory strands that I am creating a kind of harmonic convergence, an orgasmic détente in which I cry "Yes! This is my favorite!" How could only one of those be my favorite as each carries me all the way through the heavens and beyond?

There is no best painting ever. That's ridiculous. But it's not because taste is subjective; it's because each painting redefines art! Recreates art! There is no center of things precisely because everything is moving, all at different speeds and rhythms. Or else everything is the center! We can begin anywhere and find our way to the infinite. Every asana is yoga; no one pose promises closer proximity to enlightenment. In a world in motion, there is no center. Or there are infinite centers. In either case, there are no fixed points and there are absolutes. Isn't that amazing?!?

In "The Solar Anus," (yes, that's the title, perhaps my favorite title of all time), George Bataille writes, Gold, water, the equator, or crime can each be put forward as the principle of things. / And if the origin of things is not like the ground of the planet that seems to be the base, but like the circular movement that the planet describes around a mobile center, then a car, a clock, or a sewing machine could equally be accepted as the generative principle.

So does this mean I love all women — or many women — each from a different perspective? Perhaps. (Then again, the ethics of human love and the ethics of art love are different. But I think that's a tangent I won't explore now.) Sure, I can imagine a world of worlds in which each woman is the love of my life, each woman offering and extending a different me, a different infinite trajectory. But only certain women, like certain art, resonate with my skinny hebe self. This resonance happens quite rarely for me. In fact, it happens so rarely that I can say it only happens with one woman.

Very nicely expressed. Having written something remarkably similar conceptually related to relative absolutes, I was drawn to your title. Subsequently the list of films intrigued me. My favorites too shift absolutely. As do my least. I was surprised to find an affinity for Inherent Vice, given my response to the director's, in my opinion, gutting Oil! of its essence with Blood. It's true that he even changed the title to spare the comparisons, knowing fully well in advance that his attempt would not be to film the book; but still, I had read Sinclair recently enough that in spite of great film making all around, it landed on my worst of all time list. Cuz, well, Outrage! Ditto Magnolia for entirely different reasons. Nevertheless I can sense that these will change, perhaps polar-ly, just as I have a sneaking suspicion that one day Inland Empire will have gone from my top spot to me falling asleep as it plays out in front of me, while I'll be able to make it for the first time to the end credits of Dead Man still awake and wondering how in the hell I could have been "over" this kind of thing when I saw it in the cinema all those years ago. I shutter to think about the implications regarding my intimate relationships with women.

Thanks for reading and joining the fray. I never read the Sinclair so can't vouch for preference or fidelity. But I loved that film: Daniel Day Lewis is so post-human, so non-human — he is oil; he is a moment and possibility of America. It's a mess of a movie and all the better for it. And Inherent Vice! Oy! It's astounding to me — a truly Pynchonesque delirium, all stoned out, Joaquin mumbling his way all deadpan cool and sexy. But I didn't care for anything PTA did before Boogie Nights; Magnolia, in particular, I find awful. And I know what you mean about Dead Man; I had the same reaction — I thought it "beneath" me, or some such thing, and now find it brilliant. None of this is surprising, though, is it: we change so our perspectives change. Of course they do!

Thank you, too, for the reply. My beef with Blood is definitely not related to DD Lewis, who is all you say, or the otherwise excellence of the film. In fact, it is often such superb elements of the art-form that manage to miff me, in that it raises a corrupted vehicle to such a respectful level. Basically, an entire plot thread was removed that related to the preacher's radical brother, who, among other things, made his way to Russia, which was Sinclair's way of elaborating on the revolution and aftermath beyond what had been/was being reported in the newspapers. In the book, what happens in the film is in permanent parallel to the other story. Not that I think that PTA removed part of the plot out of political considerations, though it had occurred to me when I saw it.

But, yeah, Inherent Vice is all of that. It played so well I accidentally watched it twice. And Magnolia – utter ug! That scene where Cruise's character is weeping at the bedside of Robard's character, with a deep focus of the late PSH's character conveying whatever he was supposed to be thinking, which I believe was what the actor was thinking, which'd be, "How did I get roped into this?"