The Image of What's Not There

A camera can never take a picture of what's there. What's there is an elaborate milieu of horizons, a moving set of forces and circumstances, a world in motion along its many axes all intersecting, coalescing, falling asunder. It's seen by sets of eyes run through with assumptions, histories, cultures, metabolisms of different tastes and speeds. How can a camera — an eye without history or knowledge, an eye with such limited periphery and a relentless will to frame geometrically — see what's there?

The moment the camera enters the picture, the scene is changed — for the camera and everything within its stupid scope. I say stupid because cameras are the very definition of stupid: they know nothing nor can they know anything. They go as they go, without thought and without feeling.  Such is their liberation; such is their cruelty. A camera knows no justice, no longing, no desire, no sentiment whatsoever. To the lens, it's all so much light — and maybe form but form is really just the inflection of light.

And yet a camera enjoys perspective. Analog cameras always have a radical materiality — this lens and this film. Yes, the image remains plastic, awaiting realization in the darkroom where all sorts of things can transpire. But this is all limited by the raw materiality of the celluloid or what-have-you. The digital image has a different materiality: the interpretation of an algorithm. The image that appears on your iPhone screen and scattered around the interweb is an interpretation of 1s and 0s, the product of an algorithm that selects pixels to keep and pixels to throw away, that makes red brighter or darker. Or something like that.

This image remains porous as we add filters willy nilly. The digital image is plastic through and through; it's never done. It never even considered presenting what's there. It takes up light and form — form really being a subset of light — and awaits mixing and remixing by whomever, wherever. In today's image, there is surely no there there. The image will never have been about what's there. It takes pictures from the world, a thief of the highest order. And thievery is the artist's stock-in-trade. 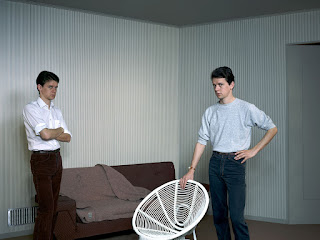 The camera creates. It frames and interprets, albeit stupidly, revealing the prejudices of its creators and its materials. In this way, it becomes an additional organ, not an extension of an existing one. While the camera can help the eye to see far beyond the eye's reach — think Hubble — the camera is not essentially an extension of the eye. It is a new appendage, an organ, a gland: it takes according to its own logic and behavior and plays back in the same manner.

More and more, I find my little camera phone a way to engage the world. I don't take it out of my pocket in order to take a picture of what's there. As we know now, that'd be in vain — and usually result in an excruciatingly boring picture. After all, what's there — what I see without the camera — is so tremendously complex, to use a camera to see it is a waste of energy and to have a picture of it is only to have trace residue — a mnemonic, at best, but never what's there.

No, I take out my camera as a way to see what I'm seeing differently, impossibly, in a way that my eyes and ears and skin never could. The camera makes a whole new sense of what's there, creates more than what's there. It extracts things that only it can, in ways only it can. Often, my bodily senses more than suffice; they are overrun and run through with sensations, percepts, affects that provoke, thrill, delight, repulse. But, sometimes, my camera becomes a great way to make new sense of what's there.

What's so fantastic about cameras today is that they are both camera and screen. As I point my camera here and there, it shows me a picture — even before that picture has been stored: a taking before the taking. I run my camera along my sweetie's body as she lies in bed just as I run my fingertips along her skin and, in so doing, see things I couldn't have seen — right then and there, as if it were in my head! It's astonishing.

Think about what happens when a camera enters the scene. I know I, for one, begin to act differently. My internal life is shifted; I become a slightly different self. This happens in a very different way when certain people enter the room — a crush, an old friend, an overbearing douchebag. We shift ourselves based on our company; we are relational creatures. A camera shifts us, too, but in even stranger ways. When a camera sees us, we are being seen by a nobody that is making a different sense of us — and can alter and disseminate this other us infinitely far and long. We say: "The camera pulls it out of us" which may be right but it could be: "The camera makes us different."

To say: "Stop recording and see what's real!" is often ignorant and idiotic. A camera isn't recording; it's creating. As my camera runs over her body — or over that tree, that street, that flower — it creates a there that didn't exist per se (which doesn't mean me taking my camera out isn't annoying to those around me). The camera, then, is not a tool of recording but an organ of engagement. It is a way to know the world differently, to engage with it differently, to make something else of it.
By Daniel Coffeen at July 27, 2017