Hedging the Flows: On Marc Lafia's "An Anatomy of Pictures"


The conceit seems at once clear and strange. Images of art from books  overlaid with found stuffs from nature — twigs, seaweed, shells, leaves — and then photographed. But what's happening here?

At first glance, there is something funny and disconcerting — and perhaps funny because disconcerting. These works of art that are so elaborate, brimming with history, sentiment, labor, love, and desire. And they're not even works of art — they are pictures of works of art, monumentalized in a book. It's all-too-human. And then there is this detritus, these scraps of nature — a dead fish, a sea shell — lying there stupid. This deadpan fish seems to be mocking our human shenanigans. And yet, at the same time, the stupidity of the fish elevates the toils of human being. 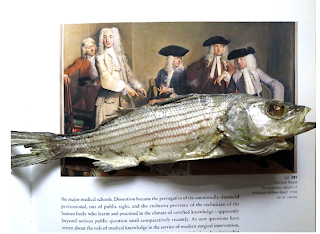 From one angle, then, these images draw a distinction between the human and the natural — and specifically between art and nature.  After all, art comes from artifice and what's less natural than that?

But by placing these things in such juxtaposition, we are invited to find commonalities of flow between art and nature. We can see this in the purely formal aspects of the works. Put aside the subject matter, the history, the accumulation of cultural signs and knowledge and we are left with forms, lines of varying intensity. Suddenly, art and nature are not opposed. On the contrary, we are invited to see it all as flows, as shapes, as motions, as gestures. 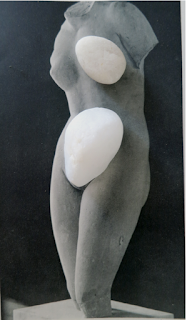 As the diverse of art images — they traverse time, space, culture — commingle with the stuffs of oceans and brush, we suddenly see the tectonics of art practice, all those movements and styles marking shifts in the very constitution of the earth. "Works of art," Lafia writes, "have genealogies and material form and like living forms continually change over time. The processes that produce art works, the materials and techniques, its raison d'etre in a culture, as these things change, art works and the activity of art and what we see as the art work also change and adapt." Just as the movements of the earth — its plates, its rocks, its flora, fauna, animals — shift, together, with the cosmic winds, so does art.  Looking at Lafia's images, we see thousands of years of non-linear history (pace Manuel Delanda).

This is not to say that nature and art are the same. What Lafia does is orchestrate this distinct flows so that they inflect each other, move in and around and with each other, at times flowing into a common river but more often flowing at different speeds, different tempos and temperatures and intensities. 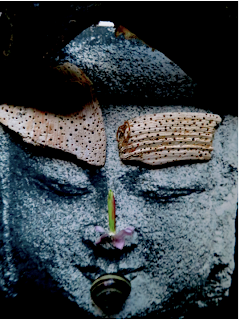 Look at this image. The natural objects fit with the face of the sculpture. But the two realms do not unite. We see, we sense, we know the different trajectories as there are limits, at once clear and blurred. And in a perhaps surprising reversal, it's the art object that is slow, monumental, tectonic while the natural objects are accelerated, giddy, pleated with whimsy as if drawn with the hand of the street artist.

Here, neither art nor nature comes first. It's not a matter of origin but of flow — flows of ever different stuffs, ever different speeds, ever different trajectories. The difference between a dead fish and a painting is not that one's artificial; it's that each distributes time, space, and matter in different way. As Henri Bergson says, they are not different in kind. They are both images.

From this view, a fish — a shell, a leaf of grass — is a self-construing work of art. It gathers together diverse elements from its environs and transforms them into itself — kelp, water, ripple, bubble, pebble, rock become gills, tail, slime, teeth. Every fish construes itself differently. A species is a school of art, all the fish following the same basic premise and rules, a kind of Dogme 95 as the species, in the words of Deleuze and Guattari, plants its placard. This is us! We flow like this!

So what of Lafia's art work? Well, the emergence of these works began with a very old fashioned exercise: he wanted to sketch. Which is to say, these works were born of the mimetic drive of art, to reproduce, to represent, the natural world.  But something happened along the way.

"in my desire to do some sketching i had gotten some books from the wellfleet [Cape Cod] library on anatomy, some works from the naturalists, haeckel and others, and some art history books. i wanted to make some drawings to bring these two things together, anatomies across forms including human, plants and animals. drawing takes a lot of time, and is very concentrated and i like that. so in the afternoon light, on the expansive woods and lawn in front of the bay, I put a small silver fish just found on a walk, on a book page with a drawing of an outline of a wolf on a lounge chair in front of me. i took out my hb pencil and looked down at the fish on the page and the outline and spent the next hour with eraser making markings on paper.

"then to record what i was doing, i took out my camera and took a simple picture. and then i could see that the camera draws a picture, sees what i can not see. the camera, and the photograph it takes, makes, is a plastic, has plasticity, has a language, the camera sees through its instrumentation something we do not see with our eyes. what i saw was that the fish was reading the wolf. it was a fish that showed me the wolf, a real fish on the drawing of a perfectly scaled and anatomically correct wolf. the scale of the fish with flies hovering about it was perfectly aligned with the scale of the wolf as it lay on this 9 x 12 page."

From mimesis to instrumentation and its framing, hedging, and stipulating of the cosmic flows: in this process, Lafia moves from the classic desire to represent the world to the modern practice of steering flows. The modern artist is not a master. He does not as much create as he does hedge: Pollock letting paint fall as it might; Duchamps putting a bicycle wheel in a museum; Goldsworthy making the tides his collaborator.

And Lafia, gatherhing these multi-layered genealogies of art and making them move, making them flow, with the elaborately pleated bodies of shells and fish to forge these...what? What are they? Photographs? Paintings? Sculptures?

No, none of these old world terms apply because Lafia is not using a medium to represent the world. His work — like all modern art — re-architects, re-engineers, the relationship between human and inhuman becoming, between nature and artifice. Lafia is not representing the world but putting on the world, putting images to work with images. Lafia, alas, is an imagist, an image maker, an agent of the image. Like our fish-artist, he gathers elements from his environs — books from the Wellfleet library, debris from the beach — and steers them, massages them, folds them into this placard, into this anatomy of pictures. 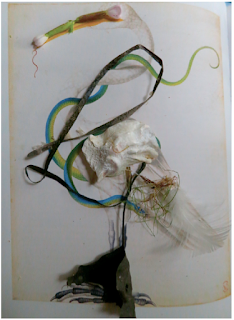 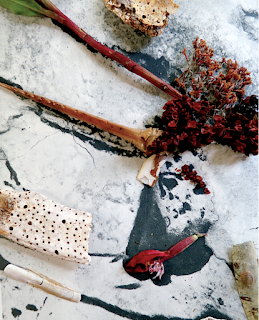 What I find most interesting about Ernst Haeckel is he presents the Affect of radical individuation. Of cause his works couldn't exists with out the support of literally an infinite number of other things, but none the less there you have it, each figure a true individual, completely isolated, self contained, and needing of nothing. Its as if interns of affect, each one of Haeckel's specimen are standing in belligerent defiance of the vary nature of the cosmos.

The 16th century artiest Hans Dürer is another artist known for his insularity affect, perhaps gaining his inspiration from his conversion to the then bourgeoning Protestant movement, which defied the Catholic church with its doctrine of personal salvation through the subjective embrace of a doctrinal statement. The Protestant movement went on to embrace the power of the state church system, which stands in stark opposition to all individualism. This is where Kerkengarad and niche came in. Both of whom carved their individuality through confrontation with collective institutions such as the church and the state, neither of whom fell to the trap of solipsistic insularity individualism. But I don't think the art of Durer and Haeckel is individualistic in the same sense as nietzsche and kierkegaard. When I look at Durer and Haeckel I see no opposition at all. I see pour harmony, a world absent of all opposition, a world of true reductionist individualism. Its almost an imposable affect, but there it is, maybe its an example of what D&G call an "acrobatic posture", like a drunken house, I don't know.

Maybe what Durer and Haeckel really highlight is the autonomy of pictures. Maybe pictures are reductionist like a test tube baby in a lab some where, but then what is the anatomy of the picture? inner workings? The splaying of parts, to discover a whole? At last the whole is alway open to the future and to other things. The nature of the picture is then what Deleuze calls the montage, but the montage is not autonomies, it only finds its identity in the formation of its internal difference, its difference in its self. No, there is an affect we call autonomy and that affect moves through immense itself, there is a percept we call autonomy and it moves through collected works of Durer and Haeckel. The question is, are these insularity precepts and affects a kind of untruth in the way that kierkegaard said that the crowd is untruth? Or are "insularity" precepts and affects honest things in their own right?