Secreting Being Seen: On the Glandular Production of Jennifer Locke 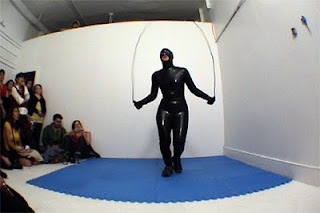 The work is physiological, muscular. There she is, dressed in latex and jumping rope for 30 minutes. There she is, letting loose the sweat and piss from her suit. And now there she is, naked, pouring water over her head. Another time, it’s glue that forms a second skin. There she is — or there they are — wrestling on the mat, flailing, breathing hard. There she is, branding some guy. Meanwhile, images and sounds — mics are often placed within the heart of the event, amplifying the aural intensity of the exertion — are exuded along with the sweat.

The mechanics of technology seem to fit seamlessly with the mechanics of the body. The camera, as Marshall McLuhan argues, is an extension of the body, a prosthetic of a sort. But in this case, it’s as if Locke, with all her physical prowess, is so virile that she’s developed this incredible appendage, like a super hero: a camera that can project her.

There is indeed something distinctly machinic about Locke’s work. Look at her there: she’s drawing blood from one arm and injecting it into the other. She makes technology — syringe, video — continuous with the mechanics of the body. Her work enjoys the temperature of the machine — cold as steel and scorching hot from churning. Her performances — and her images — are not emotional. There are no words; there is no dramaturgy, no acting, no histrionics. She does not dabble in human affect but in human mechanics.

This is not to say her work is not affective. It is. But this affect is not the affect of sentiment per se. A lot of art is splendidly rich in sentiment (without being sentimental). Indeed, most art does precisely this: it arranges affective experience without falling into sentimentality. I think of John Cassavetes’ films which drip affect yet rarely, if ever, succumb to emotional cliché. He rocks us with the power of affect.

Locke is not such an artist. Her work does not explore or deploy the gamut of human emotions. Even her punk sentiment — there is a clear creep-you-outness — is devoid of punk romance. For all the grotesquerie, this is not flipping off the bloody queen.

Locke’s performance is visceral but it is not a spectacle of viscerality. She will not allow a voyeurism that keeps seeing off stage, the viewer shrouded in the safety of darkness. This is not theater. Locke’s work performs the very viscerality of vision as she folds the act of seeing into the body of the work.

She doesn’t do this by forging a network that the viewer completes, à la Yoko Ono. She doesn’t do this by distorting vision, à la Olafur Eliasson. She does something much stranger. She takes up the act of her being seen and splays it, sprays it, along with sweat. Locke works vision itself through the techno-physiologic mechanics of the body, a body that doesn’t as much project images as it does secrete them.

Her image production is glandular. Which is to say, the images that emerge are not solely a muscular endeavor, a summoning of bodily strength that emanates via her prowess. Her body absorbs our gaze, filters it, then plays it back at us. Locke creates a living machine that takes in, takes up, the act of being seen, runs it through its endocrinologic system, and then secretes it. In her hands, the camera is not just a muscle or ocular prosthetic; it is a gland that processes the world. Yes, camera as gland: a potent, delicate magical box that takes up the world and, miraculously, secretes it anew, inflecting the whole (think: adrenaline.)

Her camera-gland takes up the viewer’s viewing of the scene — the seen of the scene — making it part of the performance, a marbling engine that entwines our gaze with her flesh. The camera does not mediate our experience; our seeing is constitutive of the performance. We see seeing. The projection of images — the seeing of this event — is continuous with the bodily mechanics of both performer and performance. We don’t just see Locke and her co-performers sweat; we see them secrete images. We see them secrete the act of being seen.

It’s as if her camera-gland has taken up the viewers’ eyes, taken up the very event of seeing, done what it is glands do, then secreted this viewing along with her other secretions — her sweat and blood and breath. The seeing of this event is digested, run through the mill of the body’s dynamics, and then regurgitated, sweated, bled back into the viewer’s eyes. As image secretions get in our eye, it makes us see — not just the bleed of life but the seeing of the bleed of life.