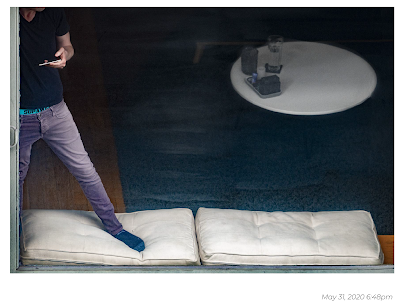 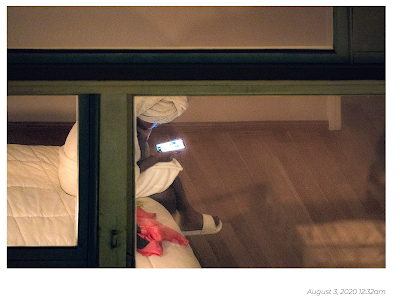 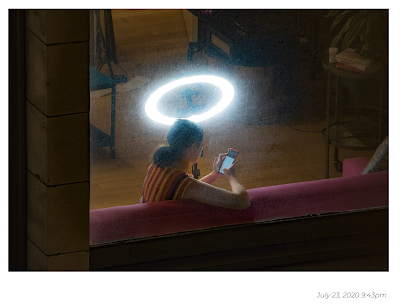 The conceit seems simple enough. During this "shelter in place", the artist takes photographs from his window into the apartments around him. As Brendan Lott, the artist, suggests there seems to be a voyeurism here, the thrill of peeking into the private lives of others, capturing them in candid moments unaware of the camera. While there may be some ethical questions raised, the project seems at heart a humanist one: we will glimpse the individuality of people, their most private selves — and, in that way, discover our humanity amid our isolation.

Think of Hitchcock's "Rear Window" and the rich tapestry that is humanity. Each window opens onto a different narrative, a different way of going. Peering past the street and into people's lives, we witness the pains and pleasures of each — those moments of individuality, all these stories and lives splayed before us. And while, for Hitchcock, violence may lurk, so do all these other modes of the human experience — love, loss, longing, despair.

Hitchcock's film relies on a certain common architecture of seeing and self. There is what we present to the world; and then there is what goes on inside. The window, especially the rear window, allows us to catch a glimpse of what is not visible in the light of the social, on the street. Our eyes look through windows to glimpse the interior life of people, to see their individuality. Hitchcock then projects this seeing through windows onto a screen as we sit in the audience, complicit in an act of voyeurism that, despite ethical quandaries, affirms our humanity. Indeed, were we not looking, a man may have got away with murder.

But such, alas, is not Brendan Lott's photo series, "Safer at Home." These images operate within a different architecture of seeing and self and hence presents a very different image both the image and  interiority. Which should come as no surprise. Since the days of Hitchcock, the status of the image has radically shifted as the act of imaging — the circuit of camera and screen — has become instantaneous, always-on, and ubiquitous.

The image is no longer over there or up on the screen, in theaters, or even on TVs. The image is right here. It's everywhere. It's us. The camera is no longer a mediation of the real. We have become image (of course, Henri Bergson argues everything is image anyway as matter = image). In the age of the networked image, we are all imaging machines. The very fabric of the social and personal identity is stitched together with images — and so what it means to look, to photograph, to be inside, to be alone have all shifted since the days of Hitchcock's cinema.

For instance, I first encountered these images by Mr. Lott in my Instagram feed alongside pictures of my friends' kids, my own kid, friends hiking, clips from Godard films, pictures of Bob Dylan, images from the Tate, ads for mattresses and air filters, pictures of my cocktails and plants, friends on vacation, promotions for podcasts. It's all one feed, one screen — ads, the personal, "art" living side by side. There is no special place for the image, no special act of photography. We take, consume, and distribute images at the same time and on the same device. This is not Hitchcock's world in which the camera might capture a glimpse of interiority and then project it later; this is the world of the networked image in which there is no interiority per se. There is only projection.

A quick survey of Mr. Lott's images tells us much. The apartments are near barren, their windows revealing not individual idiosyncrasy but uniformly vacuous lives. It's unsettling, like the opening shots of a dystopian film. This is not the baroque view Hitchcock gives us of so many lives brimming, dripping out the windows of their isolation if only we'd look. No, what we see here are lives evacuated of their particularity — bare floors, white bedding, the ubiquitous plants in their inevitably white pots, their verdant vitality mocking us.

And no faces. If Hitchcock offers us as look into the faces of humanity, including its horror, Mr. Lott gives us something else entirely: the horror of the faceless. This is a literal claim: in Mr. Lott's photos, we only ever see a chin, a side of a face or, more often, just a headless body, the face obscured by this or that. And it's a metaphoric claim: if the face is the site of our individuality, these faceless bodies articulate the evacuation of individuality in the age of the network.

Networks are strange things. While they have the ability to decentralize certain flows, such as how the internet distributes information, networks have this seemingly paradoxical effect of breeding homogeneity. This is what we call the network effect: rather than the proliferation of identities and the rise of idiosyncrasy, we get the opposite — mass movements towards fewer and fewer nodes, fewer and fewer possibilities. To wit, look at the explosive rise of monopolies such as Facebook (which includes Instagram, the home of these images for now), Amazon, and LinkedIn.

This same network effect that leads to monopolies in business leads to homogeneity of identity. In the pre-networked world, we were isolated and so were inevitably weird. Identities had no choice but to follow their own trajectories as there were minimal external coercive forces. Sure, a king or priest might give you a hard time if you were too weird— if and when you crossed paths. But there were no media pervading the home and hence not many external forces shaping our very identities. Guy Debord calls this the Spectacle. Today, not only does this Spectacle of mass media enter our homes, we actively project ourselves into the Spectacle, into this network of images and identities. And, as is the way of networks, rather than our individuality becoming amplified, we tend towards commonality. And so, as with businesses, we become more homogenous as we gravitate to a few network nodes. The nuance of life is effaced.

Look at how many of Lott's pictures involve people looking at their phones or recording themselves with the ubiquitous ring light. When we peek inside these windows, we don't see the interiority of a life. We witness the projection of a life — a life that looks like every other life. These images are a far cry from the baroque humanity of "Rear Window." 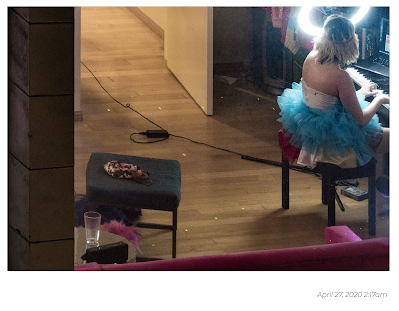 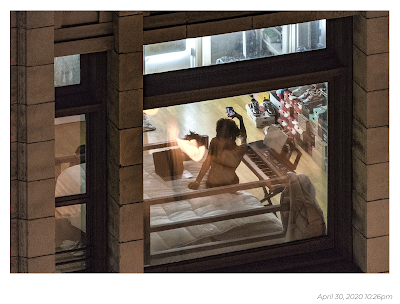 Covid and the lockdown accentuated this evacuation of interiority. Suddenly, solitude became the defining term of the social. That is, rather than our homes being a respite from social coercion, a place to be free and weird, our homes became the mandated site of social existence. Our solitude became synonymous with social participation. Which is the very condition of social media and the networked image! Just as the network turns us inside out, always already projecting ourselves, lockdown transformed our refuge from the Spectacle into the very Spectacle itself. There is no longer an inside; everything is outside.

Mr. Lott entitles his series, "Safer at Home," a sardonic, almost macabre title. What we learn from seeing these images is that there is no longer any safety at home for we are all evacuated, turned inside out, atomized within the network, all these isolated nodes gravitating towards the same center. The line that would separate a screen from a window has been erased. We no longer peer through windows; we view screens.

And rather than this exiling our loneliness by enmeshing our most private selves in the very fabric of the social, the effect is quite to the contrary. The loneliness in these images is palpable, is devastating. 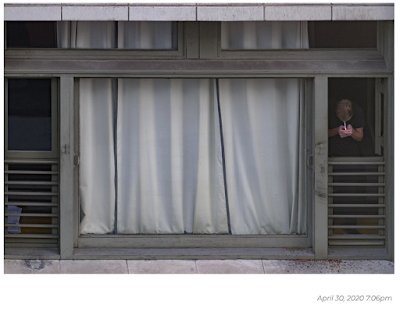 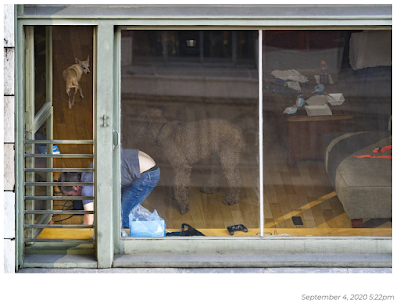 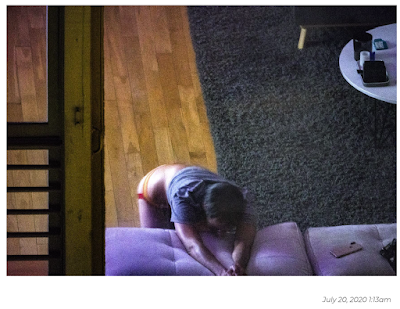 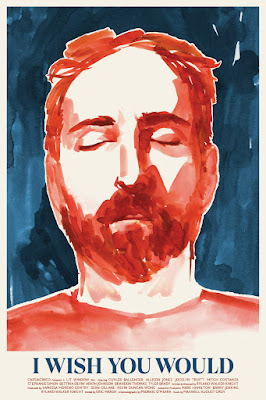