The Way of a Way 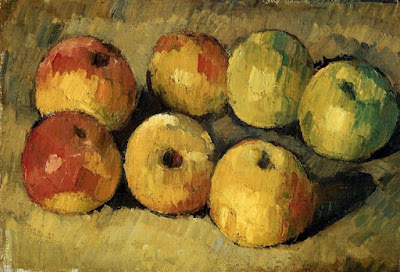 I just spent the last few days at the Sierra Hot Springs where people of all ages and sizes shed their clothes to lounge on decks and in pools. It's hard not to notice all the different ways the human body can go — this one, long and lean, is so jaunty, as if listening to some cheery diddy only she can hear; that one, a bit doughy, lilts leftwards; that one sits heavy on his heals, slouching unto himself; me, I imagine myself sauntering, a lazy, bent string bean. Everywhere I look, I am struck by the variegation and particularity of how we make our way. And that's just looking at human beings!

Birds, planets, chairs, vegetables, flatware, cows, grass, clouds: everything has a way of going. Some clouds wisp, others puff. One cat lounges, heavy and oblivious while another, alert to every rustle, is coiled to pounce. With its overstuffed and worn cushions, the couch on the deck beckons the slump of guests while the metal chairs in the grass, perhaps more nimble, demand firmer attention.

A way of going is not an essence. It is something that is created, determined by a variety of forces. As we live, we happen with the world and, cooperatively, we make and are made. Of course, things have a material constitution that seems to have hard and fast limits. As the great Stoic, Epictetus, writes: If you would be a wrestler, consider your shoulders, your back, your thighs; for different persons are made for different things. But this limit is not absolute. Just ask Rudy Ruettiger or Alexandra Billings. We may have physical limits but even these are plastic, even these are recast in the act of living as other forces come to play — economic, cultural, bodily.

Think of a tree. As it grows, it takes on the world, growing in and around and with a fence. 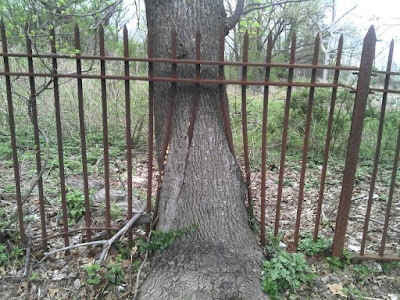 Or it takes on the wind, almost becoming the wind. 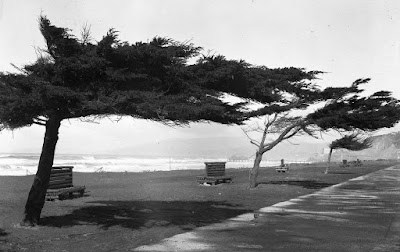 Just as a tree grows with a fence or wind, all things become with the world. Think about yourself and all the ways you took on the world and the world formed you — your desires, humor, vocabulary, imagination, the things you consider cool, that annoy you, intrigue you. Yes, you came out of the womb rearing to go this way or that; you were already on a trajectory. But that trajectory was not of your own making; your way of going occurs in what we call the middle voice, neither active nor passive, both active and passive, between and among mother and father and culture and class and history. A way of going always already supersedes the nature/nurture dichotomy.

A way of going is always a way of going-with. This going-with is determined by the respective comportment, gait, metabolism, and temperature of the various bodies. And is not limited to physical states. A cat may take on human-becoming or dog-becoming: we all know cats that act like dogs or people. My cat in college, Metapuss, would lie in my bed, her head on the pillow, her arms outstretched to cuddle. Men take on woman-becoming and vice-versa, necessarily. A person may take on rock-becoming — firm, stoic, staid. Another, the wind: blustery, relentless, swirling. We all take on the way of other things depending on our way and the way of the things around us.

A way, then, is not tethered to a body. It lives in a stranger place — not in the heavens or in the body but as a style, as a set of possibilities flowing through the world, lurking invisibly but palpably between bodies, a set of relations that link elements together in just such a way. You grab on to this or that way if you have the constitution — the comportment, gait, metabolism, temperature.

But while everything has a way of going, this is quite different than what is meant by, say, the Way of the Samurai. I capitalize that Way to distinguish it from the more generic, if always specific, way. What is this difference? If everything enjoys a way of going, what makes a Way any different?

Well, there is usually effort involved. While still existing in the middle voice, a Way demands action, work, attention, focus, discipline to counter the hegemony of ready-made life, of banal worldly distraction. But as the Taoists point out, this activity leads to inactivity, back to the middle voice, to that place between active and passive, neither active nor passive. In this sense, a Way is a repetition, a return with a difference to one's way of going — yet this Way forges a new way that may look an awful lot like the old way but is fundamentally different.

What is this difference? While a way of going is an everyday state that distributes a body and its relationship to other bodies, a Way is an active attention to folding the infinite into the finite, the eternal into the temporal, the plane of pure immanence into a body. This is presumably what Zen offers in its many practices — the Zen of tea, the Zen of archery, the Zen of motorcycle maintenance, the Zen of calligraphy. These are all practices that transform ways of going — you making tea, you fixing your bike — into Ways of going as they summon, recognize, and realize the infinitude within the everyday.

To practice a Way is to become Kierkegaard's Knight of Faith who lives incognito, never declaring himself but simply, humbly going about his business — with his family, his work, his community. But in all his actions, he makes a double move: he steps from the finite to the infinite and back, over and over, as this temporal person takes on eternity: When around one everything has become silent, solemn as a clear, starlit night, when the soul comes to be alone in the whole world, then before one there appears, not an extraordinary human being, but the eternal power itself, then the heavens open, and the I chooses itself or, more correctly, receives itself. Then the personality receives the accolade of knighthood that ennobles it for an eternity. As Kierkegaard says, a Way does not make you extraordinary; that would just be a notable way of going. No, a Way is an opening into the infinite, the eternal, the power of life within this body here.

There are as many Ways as there are ways. In a relentless double gesture, irony speaks the finite and infinite at the same time, negating any pomposity or fixity of the everyday as it points to the infinite flux of all things. Irony, then, as a Way. (But it must be careful not to drift into nihilism, negation of the finite without embracing the infinite.)

Humor, too: humor plays in the flux of it all. If for irony, the finite and infinite are fundamentally incommensurable and hence demand a kind of double-speak, humor always already operates in the flow, everything always giving way to the eternal flux with the movement of a laugh. (But it must be careful not to become flippant; true humor is quite serious.)

Meditation is a common Way. You sit and do nothing and, there and then, open to the eternal now that lurks within you and around you. The trick, as Osho might say, is to keep that eternal now in every now, not just when sitting. (But you have to be careful not to become too careful: focus too much on your meditation and it becomes another way of going, an all-too-worldly state filled with self-judegment.)

Art as a Way: it seeks the pulse of the infinite within the material of this world — paint, color, light, image, fabric, bronze, paper, wood. After all, we know the difference between mere use of paint and the artist's use of paint. When I paint, my image remains firmly in this world, stuck in its materiality. Sure, there may be a flair here or there, a moment in which a line may traverse into a gesture of infinite becoming. But this is what the artist seeks in every gesture. This is not to say that she always succeeds. As DH Lawrence writes of Cézanne: "We can see what a fight it means, the escape from the domination of the ready-made mental concept, the mental consciousness stuffed full of clichés that intervene like a complete screen between us and life. It means a long, long fight, that will probably last for ever. But Cézanne did get as far as the apple. I can think of nobody else who has done anything." (All art risks cliché, DOA images.)

This is a beautiful description of a Way: it is the effort to overcome, to break through, the hegemony of ready-made life, to work towards finding the seething life, the eternal life, within everything. After all, our ways of going too often find themselves tethered to the shenanigans, the soul crushing banality, of the everyday, ignoring that this and that resonate infinitely. Why doesn't she text me back? Will this traffic ever end!? Will I get a good grade? A Way is a shifting of one's focus to the beating heart of life that lurks within the all-too-often deathly drone of one's way of going.
By Daniel Coffeen at July 29, 2018