The Beautiful, Hilarious Way of Discussions 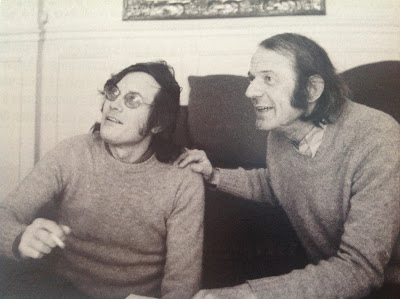 "Every philosopher runs away when he or she hears someone say, 'Let’s discuss this.'"— Gilles Deleuze

So I'm at a dinner party the other night, a small affair of three couples. I am rarely invited anywhere. I assume this is a for a variety of reasons but I believe this story will be the best explanation. But I was invited by people I love and have known a long time and whose company I always enjoy.

There are six of us, everyone smart and articulate. Somehow, probably my fault, we get on the subject of addiction. I suggest that addiction is a needy attachment to something — yoga, cigarettes, work, alcohol, admiration.

Over the years, I've heard people say: you have a drinking problem if and when said drinking begins to interfere with the rest of your life — if you're hungover, moody, sick and such from the booze. I think I can accept this criteria, in which case, I'd say most people really suffer from an addiction to work. It's an addiction far more prevalent than, say, Oxycontin. I mean, jeez, talk about interfering with your life! Junkies actually often write about scoring junk as their job.

So, yes, I casually throw something out there about addiction being excessive or desperate attachment — a clinging — and someone says But what about genes? Some people have a gene for addiction.

Well, maybe, I say. But what's a gene? And why and how did the gene — this thing I can't see and only very few people know how to even read — become the master term dictating behavior and trumping all other takes within a discourse? It's really weird to me. And then, perhaps to be a bit provocative, I say: Reading one's genetic make up is akin to having someone read your tea leaves or tarot cards. Which, in my book, is not to denigrate tea leaf or Tarot reading at all. They are all ways of reading a person, "knowing" a person. There are in fact lots of ways to read someone. Smelling, for instance: I think you can tell all kinds of things about a person by smelling her.  Or talking to her. Or smelling her and talking with her. (I appreciate the critique of "he" as a default for "one." But I find it difficult to use "they/them" when I'm moving between singular and plural — not due to any clinging to grammatical etiquette but simply because I find it difficult (an addiction?). So, in the meantime, I change up my third person pronouns, moving between he and she, him and her, when I can.)

Well, this set off one participant at the shindig (the guy in the couple I didn't previously know). He says something to me about having a methodology to reproduce the same results over and over as a good and necessary thing. I find this odd as he's a wine writer — that's a great qualifier of a writer! What qualifier would I use? Could I use? — and I loved hearing him talk about all these differences in wines and their making and his disdain for insipid wines — his word and an inspired choice, methinks — that seek to reproduce the same taste over and over. In retrospect, I should have brought that up as a way to suggest that the prevailing scientific method of aiming to reproduce the same result over and over is fascistic (invoking fascism in such a context is 15 year old me trying to rile shit up by going to the extreme, a poor rhetorical move for so many reasons, first of which being the ensuing turmoil that demands an ill-spent energy expenditure on my part. Oy!). After all, isn't fascism, among other things, the insistence on sameness?

He's pretty worked up at this point. Me, I'm a little drunk. (Who's addicted to what in this situation? Is ideology an addiction? People who cling to "he" or heterosexual marriage are addicted to some belief that bolsters their identity, no? Hmn). But he starts talking about bridges, about how glad he is that we drive on bridges that use this scientific methodology (I use "scientific" here in the colloquial sense; I think science can be something else entirely but give me a moment here). People love to bring up bridges. To which I suggest two things: If we use the same methodology over and over, how will anyone come up with a new way of building bridges? And: sure, I'm glad bridges use this methodology. But do we have to apply it to human beings or, say, wine making? Sometimes, we want a methodology that seeks difference rather than sameness.

In any case, I made it clear that I am not against science (I have no idea what that would even mean. What is it to be "against"? What is "science"?). I just wanted to suggest that there are many different ways of making sense and while science, in some settings, serves us well it need not be the only way to make sense. (This kind of claim — not going against but just restructuring the assignation of privilege, is the hardest to convey. When I taught immanent reading, my students assumed I was against exemplary reading when, in fact, my point was and remains: it all depends. No term need be privileged other than the non-privileging of terms except when it makes sense to privilege terms. People who are adamant — who are, perhaps, addicted — to having a position look for a way to be for or against something. Rhetoric, I maintain, is going with — neither for or against, at least not in any universal sense.)

Oy. Such is the way of discussions: none of us are talking about the same thing. All there is, usually, is a fury of claims, postures, intensities. It's usually quite confusing to me. This is why I don't have "philosophic" conversations with anyone but two people I know well, whose terms and tone I understand and enjoy and can play with. Otherwise, every conversation I have is like this one above — there's no way to begin. We are in such difference places, with such different assumptions, how can we possibly discuss such things in any joyful way?

This has long been my problem with participating in the social: I don't understand the terms anyone is using. I don't read the news; they don't read Bataille. How are we to converse? It's why I find weather to be a great subject. It couldn't be more interesting, in a visceral sense, to both parties. It affects everything! And, according to the terms of discourse, we're allowed to have different readings, different modes of pleasure, of the weather. While people generally think a beautiful day is sunny and warm while I prefer still, overcast days, this doesn't anger anyone. We can see the other's point of view. But say that I believe genetic testing is akin to tarot reading (I see this as giving props to genetic testing!), and people don't know what to say or think.

And so I stay home alone, often (except for my poor kid who has to endure all kinds of weird shit).

I never enjoyed grad school seminars — as student or professor. Seminars are supposed to be these intimate venues in which all voices can participate as, together, we discuss a text, discuss ideas. All these damn discussions — as if discussions were inherently a good thing.

I just didn't, and don't, find that to be the case. I'd sit there as different people took turns talking to each other, assuming a tone of response (often aggressive or hurt — by what was always unclear), but to what end? Are we explaining an idea to each other? Isn't that the professor's job? What is the purpose of a discussion?

This is not to say that discussions can't be useful. On the contrary, discussions are a great way to reach consensus on a subject — which, I believe, is the point of a discussion. Such is their architecture. For instance, I lived in a communal house in Berkeley, very briefly, in the summer of 1992 (I never lived in Berkeley while in grad school there; at the time, I found it had the worst of all worlds — the humdrum of the suburbs, the potential for mugging of the city. The town of Berkeley was no place for a randy 22 year old). Anyway, we'd have weekly discussions about shopping, chores, repairs. After a few weeks, I made a suggestion: How about no more communal living? We'll shop for ourselves and clean up after ourselves. We had a brief discussion and, sure enough, we disbanded the communal aspect of the house. In this case, a discussion — a means to build social consensus — was useful to peacefully rid ourselves of the need for consensus.

But what's there to discuss in a classroom? I know, I know: that sounds absurd. People love classroom discussions! That's how we learn, right? Get everyone involved! All voices heard!

But I never learned that way. Discussions are architected to create and facilitate sameness which, in the proper setting, is great. But in my day to day living, in my learning, in my philosophy, I want the many-splendored wonders of difference.
By Daniel Coffeen at December 12, 2017

what the Tee Vee taught said...

Hello and Holy Shit. This. Is the good stuff.

Hey! You honor me — by still reading. And I'm glad you dig this piece: I dig it, too — although I think we might be alone in that. Thanks, as always.

That was one of the things I appreciated most about your classes—you gave us plenty of time to sit back and listen and mull over what you were saying. The "interactive" and "dynamic" classroom sounds so sexy and great in theory, but most of the times in my educational life that I had to work on team projects or discuss things as a class, it was so fucking tedious. Listening to you pour your heart out in those rhetoric classes—I truly loved every second and I think everyone else did, too. It was a luxury.

Oh, Linz, you melt me. Thank you. The fact is, like you, I never cared much for the thoughts of my peers, at least in the practice of a classroom. So I taught the class I wanted to take: me rambling to myself.