Thoughts on My Experience at the Symphony 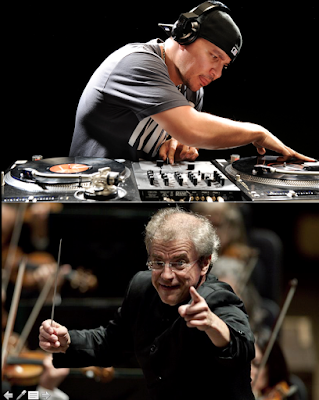 When I was in my young 20s, I thought going to the symphony was sophisticated. So I went now and again. And I could say I was bored, which is certainly true. Bored off my ass (which is an odd phrase now that I write it). But it wasn't just boredom I felt. It was closer to confusion: I didn't know what the experience wanted of me. I didn't understand the terms of its appeals, its argument, if you will.

But I went this past Saturday night with my sweetie who was excited — an understatement — to see (to hear?) Sibelius' Violin Concerto. I could tell you it's the one in D Minor but he only wrote one concerto (thanks, Wikipedia!). Me, I'd not only never heard it, I'd never heard of Sibelius.

As I sat there, in a suit no less as that's how I roll (how is that, exactly?), many, many thoughts streamed through my head. Part of going to an unfamiliar experience is that the terms of its operation are more exposed. I don't have a habit there (other than the habits of being me). I don't know the rules; I take little for granted. Which affords me a great luxury: the ability to see the medium along with the message.

Anyway, we had fantastic seats: an orchestra box. I offer this as it was an important part of the experience for me. A box has its own door. For an aging man who enjoys his pre-concert cocktails, ready access to a bathroom seemed essential.

I don't mention this just to be silly. One of the conspicuous aspect of the symphony experience, as distinct from the rock & roll experience, is the demand it makes on the body. Rock & roll is about moving the body, however the body wants to move — stand, dance, rock, twirl, twitch, talk, walk in and out. Of course, the one thing you can rarely do at a rock & roll show is sit down. And this old man likes to sit down. So having a relatively comfy chair from which to enjoy the music was delightful.

But the fact remains that you can't get up and walk around. In fact, every cough, gulp, excessive leg movement suddenly comes to the fore. And, like that, I understood in every fiber of my being the productivity of repression. Sure, the symphony has rules that repress the body. Don't make noise! Don't move too much! But in so doing, my body's sundry needs and and desires became all too apparent. I could feel myself not moving, not pushing my chair back and putting my feet up, not making snide off color remarks to my exquisite date. The negative puts enormous attention on that to which it says no (pace Foucault).

And I found myself thinking about the distribution of affect and power within, and I suppose without, the orchestra. There's this written set of directions that dictates timing and mood — but, as it's only written, there are limits. There's the musicians who feel, who inhabit, their contribution to a greater or less degree as they let that one note linger or want to wait a nanosecond before coming in because, well, because that feels right, dammit! But there's a whole orchestra there and, gesticulating in front of them all with the biggest salary, is the conductor whose only job is to determine the timing and affect (two fundamentally intertwined things) of the part and the whole. I kept picturing the oboist shutting his eyes as he lets that one plaintive note moan a moment only to open his eyes and see a disgruntled, disheveled man putting a kibash on that oboe with a concerted wave of his baton.

A conductor is an old fashioned dj.

Conductor as conductor of affect is just plain old awesome. I think there should be more conductors in more positions, steering the timing and affect of all sorts of experience. This is an argument against, or not quite in line with, democracy.

The part-whole relationship within an orchestra can keep your head spinning for days. And I like it.

Then there's the experience of the music. Do I keep my eyes open or closed? Open can be interesting. I really liked many of the conductor's moves, especially this thing he'd do when he'd bend down low and point his open hand farther down, concertedly, as the basses and cellos descended. (For those who care, it wasn't MTT; it was a guest conductor.)

The first piece was a short little ditty by Sibelius entitled, "Finlandia." It was a nationalistic nightmare, for the most part. (Nightmare is certainly an overstatement but alliteration is a temptation I rarely resist.)


No doubt, the Violin Concerto is something — moody and odd and meandering and featuring a featured soloist violinist (that phrasing doesn't sound right at all) who seemed 19 years old and totally awesome. There are a few show offy Yngwei Malmsteen moments I could do without.

And then I sat back and tried to place when it was written. I was sure of one thing: the person who wrote that piece of music never saw, never imagined, planes dropping enormous bombs out of the sky. There is certainly some angst in the piece. But it's romantic angst, not neurotic angst. (I guessed 1907; it was written 1902-1906.)

This was made all the more obvious by the final piece of the night, Shostakovitch's Symphony 1. That piece was certainly written after planes had demolished cities with their payloads — the marshal angularity, the sudden anxious shifts.

Which made me think about affective events that dominate a spatio-temporal milieu. What kinds of art — visual, literary, musical — become possible after the mechanistic killings of World War I (does, say, New Zealand or Uraguay or Zimbabwe even know what World War I or II would even mean? Were they really world wars? Like I said, a lot of thoughts go through one's head at the symphony) or the dropping of the nuclear bomb on Hiroshima?

Which made me think about a comment a musician friend of mine made about lot of contemporary music. There is this strain within minimalist techno-pop — think FKA Twigs or The Weeknd — that is built on a sense of menace. Not necessarily menace that the music is going to cause you but menace in the world, menace that needs to be made sense of, menace that creeps not like the marshal drumming of Shostakovitch's armies and bombs but like the twitchy tech grip of the Corporate-State Apparatus.  There's great sentiment in Sibelius' piece but there's no menace, no hums and tics of surveillance — not even the loud, dramatic death toll of Düsseldorf.

The play of generosity and the dictatorial is so different at the symphony than at a rock & roll show. Rock & roll lets you meander, talk, piss, drink but all the while it is driving towards you, pandering to bring you into its fold with a near fascict vigor. Songs may be complex but, live, usually have one driving figure, a melody or beat, that tries to sweep you up and out. At the symphony, I find it hard to find the melody, if that's even the right word. The music is all over the place in terms of mood and melody. And so, although my body is constrained by outdated etiquette (well, not all of it is outdated), the music lets my mind roam any old way. It's quite dreamy. And then I look out over the other heads and faces and find they, too, are in their reverie. While rock & roll often tends towards the one great Yeah!, orchestral music foments a multiplicity of dreams and images. Me, I mostly just liked being there, a strange place for me, wearing strange clothes, all these ideas ricocheting around my head, and a lovely lady by my side.
By Daniel Coffeen at October 30, 2017

At some point I plan on writing something similar as a person who has played music in these various contexts. I also want to think about this as a listener as well.

Thanks, Clurg. And, yo, Roca! I did know he composed; I did not know it was recorded. This is awesome. Thank you, thank you.