Always Already Coming: On Fabric and Marc Lafia's "In What Language to Come" 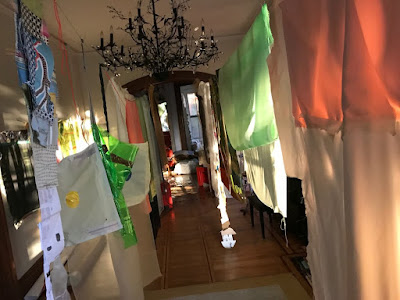 Go here to see image upon image of this work >>>

A painting is a material whose materiality is repressed. It becomes forgotten, background, a no place, a blind spot. We look at the paint, not the canvas. We can say the same of photographs and film: the material — the paper, celluloid, code — are quieted by the play of significant and signifying content. What matters is the image freed from its materiality, an image that can somehow exist anywhere. Sure, we might focus on the paint or the exposure time, comment on the density of a painting's paint. But we rarely, if ever, see the canvas, paper, and plastic.

This has of course been amplified by the digital network. Images are no longer tethered to any material other than ones and zeros, interpretive algorithms that transform those numbers into an image that can be seen but not touched. It's as if the image has finally been freed from its body, pure soul manifesting here and there. The materiality of art has responded by becoming monumental, the stuff of stories — think Koons or, in film, Michael Bay — or conceptual, rarely taking root in thingness. Or else it's all petty bourgeois craft, people relishing the feel of wood, of rope, of clay — which is great. But it's not art. It's not creation as such; it's delicious commodity, a decadent relishing of stuff.

Marc Lafia's work often focuses on the terms of image making and distribution — on photography, on narrative, on algorithms of sense making, on the always-on network (which, as Lafia makes exquisitely clear, is a ubiquitous camera and screen). In his work, he has made semiotic content secondary to the production of semiotic content which, in turn, becomes the semiotic content. Which is to say, it's not that his work is absent signification; it's to say that what he signifies is the very terms of signification.

In this new work, he has shifted from the means to the stuff. If in earlier work, he presented the seeing of seeing, in this work he presents seeing as such — an absurd claim, perhaps, and one I am making, not Lafia.

This is not to say that fabric is free of significance. On the contrary, it is mired in it. But this mire creates a miasma that belies ready reference or any direct didacticism. The referential trajectory is blurred, veiled, drifting and draping this way and that, blowing with the wind, wrinkling and pleating, often a folded mess of a pile, multicolored and multi-textured. It is not quite babel but it is polyglottal, alternately and simultaneously euphonious and cacophonous.

Fabric is at once something and not something. It is usually a means, a vehicle, an ornament and not something in and of itself. For centuries, it was a currency, something of value, yes, but something to be exchanged. And, no doubt, today it retains a certain value, the stuff of consumerism.

All the while, it is saturated with association. It is the stuff of clothes and bed, of fresh from the shower and cuddling on the couch, the softened ground beneath our feet, the surface of our sitting. It surrounds us, encloses us, and while we might pay this or that version of it our concerted attention, the fabric as such tends to remain secondary.

And then there is the phenomenology of fabric. It is technically a solid but it shares an affinity with liquid, almost filling its container. It is fundamentally pliable, plastic, as if awaiting use, scissors, stitching, glue. In this sense, it is akin to the digital, a file always awaiting manipulation. But unlike the digital, fabric has an immediate tactility — it is seen and touched before and as it is manipulated. It is not just palpated; it is the stuff of palpation.

In this work, Lafia does not use fabric as a backdrop. It is fabric and nothing but: fabric on fabric, fabric with fabric. And not to create an image as, say, Rosemary Trockel does. Nor to act as symbol or a means as Joseph Beuys did. And it's certainly not the fine craft of, say, Turkish kilim. Rather, Lafia engages fabric as fabric, using fabric perhaps as a painter would use paint — only, in this case, the painter paints painting.

There is, then, this sumptuous redundancy in Lafia's work. Rather than zoom out or zoom in on the means of image making — as he has so often done in the past — here he remains thoroughly and completely within the realm of the seen, within the realm of seeing. He creates an orgy of fabric, bodies mixing with bodies in all sorts of relations and juxtapositions and with no desire other than this — this frolic, this play, this drape and drift, these folds, this billowing. It doesn't add up to anything; it goes nowhere. It doesn't try to point to meaning or to an experience other than this — a tautology, an haecceity, a redundancy, the world touching itself everywhere, a polymorphously perverse onanism, a plenum of palpation.

This is surely a new language freed of signifiers and signifieds, free of Saussure's semiotics, Lacan's algebra, and Derrida's deferral. Untethered, this is a language free to roam (like all poetic languages). Unlike the language of stretched canvas and pinned art, these fabric works occupy their territory with grace and aplomb. They can live anywhere (I accidentally typed "love" anywhere, a fortuitous mistake). 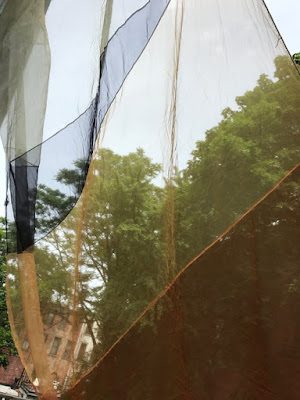 There is a certain aggression, no doubt, an aggression implicit in any territorialization. These works not only take over a space; they want to take over a space, indoors or out, big or small. They do not stay nailed to the wall, discreetly out of the way, only to be looked at now and again. No, these works inundate, spread, drift, drape, get in your way.

But not all territorializations are created equally. This occupying tongue is passionately languorous, generous, joyous; it softly but insistently spreads the word — which is to say, it spreads itself. This is not only in what language to come. It's in what language is always already coming.
By Daniel Coffeen at June 14, 2017