Holy Cow, or Understanding Nietzsche and Deleuze & Guattari as I Stare at the Buffalo


It's Christmas, my favorite day of the year — no obligations, nowhere to be, no one wants anything of me. So, as I've done for decades, I went to Golden Gate Park and sat with the buffalo. Yes, there is a.... pack? a herd? a bunch of buffalo in a large pen in the middle of the park. So I sit down on a bench and just watch these buffalo sitting there. I wasn't the only one.

We think about viewing animals and nature as a way to know and learn. We study them. But there's always another way of looking that participates in the becoming of that thing, the way of that thing. To watch a buffalo is to take in this enormous, impossible equanimity, to entwine with it, to ride buffalo becoming, even if just a bit.

Man o man, these animals are cool. No sudden movements. No pacing. No hunting. They sit there, utterly content (more or less). Sometimes, they stand up and eat the very thing they're sitting on. No need to forage: their bed is their food is their home.

And it suddenly struck me why, to some, the cow is a sacred animal. Of course it is! What greater example of equanimity is there? What greater expression of absolute peace with the world? What a beautiful will: the will towards, with, of cow-becoming. 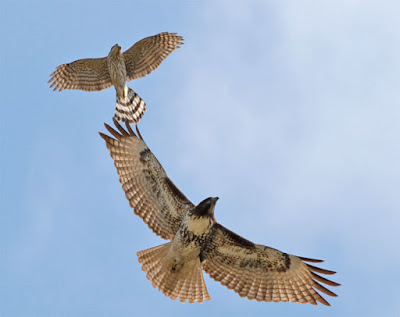 Above the buffalo, I watched two hawks hunt. They were clearly hunting together, moving together, surveying the fields, navigating the winds. Everything they did was in some kind of conjunction with each other as well as with the ground and wind. It was so clearly a machine, a system distributed along diverse and shifting lines (unlike, say, a factory, conveyor belt, or train).

Two systems — the buffalo and the birds of prey — sharing this space with such utterly distinct wills, distinct ways of operating. Buffalo are so terrestrial. They don't go with air and wind too much. Meanwhile, these hawks glide so effortlessly through space, just modulating their position to veer this way or that.

Of course, not all cultures consider the cow sacred. I think of the Ancient Egyptians, of whom I know nothing, and their worship of the cat. Oh, jeez, cats are clearly incredible — solitary, strong, poised, slick, quiet, stealth, content but in a way so different than the cow.

Two wills, then: one worshipping the cat, the other worshipping the cow. I suddenly understood both Nietzsche and Deleuze & Guattari in whole new ways. For Nietzsche, we are our wills to power — how we make sense of the world, the very modes of knowledge, the things we decide to study and how we study them, the ways we distribute ourselves socially, the way we make sense of the infinite, of power, of our desire. We are not doers; we are deeds. Will is not something extraneous to us, something added to the body. We are this or that will to power: the will to cat, the will to cow, the will to skinny Hebe saying all kinds of things.

Religion, then, as a desiring machine, a way of channeling, cutting, condensing, distributing desire, an entire schema of codes and art and truth all expressing — creating — this desire: this desire to be cat, to be cow, to be skinny Hebe.

I've always loved the mountain lion. I've yearned for its independence, its solitary contentment, its strength and poise. Which is to say, I've always leaned into cougar-becoming. But watching the buffalo today, I want that equanimity amidst it all. I feel a will to cow coming on.
By Daniel Coffeen at December 25, 2015