This was not a will to judgement. I had no desire to condemn or even asses anyone for that matter. I just wanted to inform them, in total benevolence, total naivete, total innocence, like a weird big nosed Jew angel.

And yet it was more than that  — whatever that is, and I'll return to it in a moment. This will to commentary was my pleasure in being able to enjoy the undulations of the scene.  There was so much nuance, so much rise and fall in these faces and encounters, these local reckonings bearing their histories and futures. I liked just being able to ride the crest of that energy. I felt like I could float on it, lie down and be carried along its eddies, flows, and stillness. Commentary, then, as surfing.

And surfing the undulations of it all, not just the social. As I left the bar, which happens to be mere blocks from the beach, I walked into the sun setting over the Pacific. And I wanted to comment on that, too, to tell the wind and the sky and the ocean what was so charming and annoying and beautiful and odd about everything they were doing.

As I got to the beach, people were sitting, as if in a sandy theater, eyes glued to the screen of the horizon. I kept looking all around, turning about, riding the scene of the ocean, wind, sand, social, city. I loved how people looked as they looked. I loved the way the sky over the city shifted. I felt that steady wind pick up speed with the descent of the sun, as if the sunset itself were suddenly blowing into me. And through it all, I wanted to give my commentary! And, frankly, I'm pretty sure I was muttering out loud. 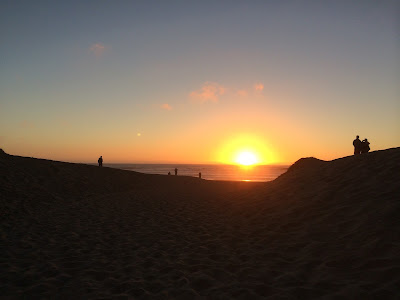 There is this incredible pleasure in letting the event guide, not as detritus caught up in its fray, but as a body that's navigating the ebbs and tides of it all. This surfing is not a quiet surrender; it's a continuous articulation, in every sense — affective, linguistic, physical. The event summons and declares certain words through me. I'm the conduit that Burroughs imagines himself to be: words come, we write them, say them, offer them. Commentary, then, as an inflection point, a seam forming between (and amongst) my body and the world.

No doubt, my will to commentary is a will to a certain kind of control. I am somehow not implicated; I just ride along as jetsam, gossamer, barely palpable wisp of a presence to others. But of course the commentary undoes that invisibility, it announces and implicates me. Commentary is a weird kind of participation.

Which makes me think about sportscasters. They have this very peculiar job to announce and comment on an event that you're seeing. What's beautiful about it is precisely that challenge: What posture towards the event will the commentator take on? What stance? The worst announcers, and there are lots of them, tell you nothing new or, worse, tell you things that sour the event. Joe Buck, from Fox, loves to do this, at least in baseball: he points out who's failing (rather than who's succeeding and why). To hear his commentary is to hear a sick body at work, reacting poorly to the world and forcing his ill constitution on as many people as possible. I truly believe that a bad sportscaster should face criminal charges for sickening the world.

But the best sportscasters add this beautiful inflection of the event. They somehow magnify, repeating the event's physical visuality in words. It's a kind of echo but it has style, a distinctive and productive way of repeating what just happened. I can hear Jon Miller announcing as Gary Sheffield was at bat. Miller, in his focused intonation, observes, "Sheffield, menacingly shaking his bat...." What a beautiful read! And what a great contribution to the event — that word, "menacingly," so perfectly uttered. In that instant, Miller's commentary stretched the event somewhere I hadn't at first noticed — Sheffield's menacing stance — but forever shaped my way of perceiving not just that at-bat but all at-bats, forever.

I love that at-bat is a noun.

But it's not just his interpretation. More often, it's his emphatic repetition.  He make home runs somehow more — more exciting, more explosive. He makes the pitches bend a little more, curve a little more, snap a little more. Which is to say, commentary doesn't need to go unexpected places. Sometimes, it amplifies, vivifies, vitalizes. And what's better than that?
By Daniel Coffeen at October 14, 2015

Peter Angelos firing Jon Miller as voice of the Orioles ended my affair with the Orioles. Listening to Miller to Orioles games was one of the great joys of my life (and he was doing his Vin impression back then too, as well as making the sound of frying bacon when reading the copy of Esskay commercials).

Your essay exemplifies the playful pleasure of appreciating organization, of noticing the complexity inherent in the way that objects and scenes -- in short, experiences -- are experienced, not just to anyone, but, I would argue, to you specifically. It conveys, too, the zestful flavor of the joy of articulating that what-it-is-like-to-you-ness. There's a poetic flair in detailing the central, the most vivid "facts" behind things, which are no other than the facts that underlie our minds. The urge to comment, to be that "conduit," is identical with the urge to know the self by expressing its moment-to-moment organization.

BDR: Yes yes yes...He, along with Kruk and Kuip, re-ignited my love of baseball.

Akilesh: This is beautiful and, as you note, is what I was trying to get at with the notion of being a conduit that is an inflection point, a singular metabolic turn. Your insight is brilliant: it creates me as much I 'comment' on it. Thank you.