Consider, for a moment, this strange practice of writing. Consider how many different ways each sentence can be constructed. Consider all the possibilities of tone, mode of address, timbre and rhythm. And then consider the literal stuff of writing — words, ideas, evidence, citations, punctuation. There is a lot to reckon.

I taught undergrad comp for over 10 years and I loved it. There is an incredible intimacy to teaching someone how to write. It's not just a matter of teaching a series of grammatical rules, a few vocabulary words, and the structure of a topic sentence (unteaching the will to the topic sentence demands half a semester alone, not to mention unteaching arbitrary grammar. In my class, students were free to wantonly split their infinitives; to end in a preposition if they wanted to; and begin a sentence with and). To learn to write demands learning a mode of moving with the world. It's not a base of knowledge. It's a skill.

In many ways, the teacher of writing has more in common in with the sports coach than with the drill sergeant. There is a mechanics to writing, yes, but then there's something else: the way all the elements hang together. There is no right way to write or swing the bat. There are possible ways. It's the teacher's job to instruct in the way of the domain, to convey what's possible, what the limits, dangers, risks, and rewards are. You can have technically precise form and suck just as you can have technically horrendous form and be great.

(For some reason, I'm thinking now of Gary Sheffield, the retired baseball player. His batting stance was a mess of so-called extraneous movement. And yet he was an incredible hitter.  I remember  hearing the great game caller, Jon Miller: "Sheffield stands in the box, waves his bat menacingly...." That menacingly is not something a batting instructor teaches his players.)

When I taught comp, there were certain exercises I used to instruct in the way of words — free writing, imitation, reading aloud to reckon the palpability of words. I wrote about this here. But in that piece, I glossed over the real difficulty in teaching someone to write, namely, how to construct an argument.

Writing is not just words and the conveying of information. Writing weaves together, makes connections. It picks up different things — feelings, citations, ideas, moods, beliefs — and pieces them together into some kind of a whole that remains multiple while still being cogent and coherent. It's not a list of discrepant elements; it's a weaving together of discrepant elements. Writing makes sense of the world, assembling it just so.

How do you teach someone to do this, to make sense? How do you teach people to connect different pieces of the world together in a way that works for them and for their audience?

Well, the first thing I always had to do was unteach them. As undergrads at Berkeley, they had all got As for ages on shitty papers. It was interesting to see the ideology implicit in their state run pedagogy. Their first papers would inevitably begin with some sweeping generalization: Man has long pondered the nature of being. In Ecce Homo, Nietzsche gives his definition. That is to say, they always felt they needed to begin as widely as possible and then show how whatever they were talking about fit into that epic schema. Oy. When I crossed out every vast, general claim and gave them a C, they freaked out.

The first rule of writing arguments: be particular. After all, do you know that man has indeed long pondered the nature of being? Are you an historian? Or are you writing about Nietzsche's essay? Stick to what you know. As an historian of all mankind, you have no authority. But as a reader of this one essay, you are as expert as any other reader.

This meant teaching them a different architecture of argument, a different way of piecing elements together. Rather than this odd pyramid they were used to (they would even draw for me this pyramid they'd been taught), I wanted them to move with a text, to make their way through it in their own way: to tour it, to move through the text laterally, linking specific elements along the way.


There are as many ways through a text as there are readers, and more. Your job as a writer is to make your way through and bring your reader along for the ride: Let's begin here. Notice this. Then see this. But don't think it's this. On the contrary, it's this other thing all together. And so rather than seeing that, see this.  Take your reader on a tour: There are lots of ways people might make their way through this text. But this is my way. Writing an essay is not arithmetic: x + y + z = a. It's calculus.

Where should an argument begin? Well, with whatever stood out to you, that you noticed. You say Nietzsche seems to contradict himself in this sentence? Then begin there and discover how such a contradiction functions within the rest of the essay.  Or he keeps using the metaphor of the bee hive? Well, so what? How does this inform his argument? Why should I care?  Follow the thing you notice and see where it takes you.

This is easier said than done. The main thing young writers would do is list things they notice: Nietzsche does this and this and also this. After a few semesters of this, I made a new rule: every use of the word "also" resulted in a full drop of grade (I added "in addition" to the forbidden words). I wanted them to use words of connection such as but, though, that is to say, on the contrary. I wanted their tours to move rather than just be a vertical checklist of greatest hits. I want all the different points to have a relationship. This is the second rule of writing: don't list. Make connections between things.

Of course, in order to make an argument, you have to know how arguments behave. So, just as a shortstop in baseball learns through experience — by fielding a wide variety of hits and learning the ways the ball can go, its speed, its curvature through space, its calculus — I taught arguments by showing students arguments. Together, we'd read a text and then construct an argument, point by point.

The tool I used is what I call an Argument Map. This is different than an outline. An outline repeats the hierarchy and the list when an argument is a horizontal movement through. The Argument Map focuses on the transitions between points. I  never had students write rough drafts. Instead, I had them deliver their arguments to me in no more than five related points, each point written out as a sentence. In one quick glance, I could see their thinking, see the argument, note the holes, gaps, leaps. 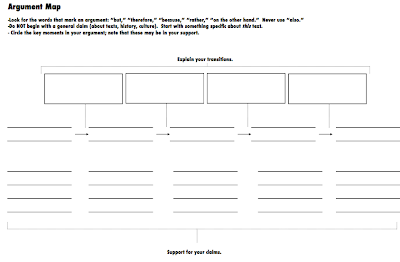 Once a student had a concise, clearly delineated argument, their papers flowed. Indeed, I discovered that when someone doesn't know what they want to say, they meander. The language becomes vague; paragraphs prattle on and drift. But once students know precisely what they want to say, their language becomes pointed. The passive voice vanishes. Sentences become tight, focused — they lead the reader somewhere.  The third rule of writing: Know what you want to say (even if you discover it while writing).

Daniel,
Is there a particular text on writing that you could point me to that you think is consistent with your model?

The Posture of Things

You're shopping for a chair. As you browse the aisles, you note the variety — from backless computer chairs to high bar stools to plush ...