What strikes me immediately about this painting is the continuity between background and foreground, between what we might call landscape and portrait. The blues of the water are repeated, albeit it with difference, in the dress of the woman. The orange of the ground — why is it orange? — becomes the orange of her face, the flesh of her leg. Even the strokes are of an ilk, as if the painter didn't stop his strokes between face and earth.

Here, the human is a form within a scape of other forms — trees, sea's edge, clouds, chair. The human is not a privileged moment. She may be in the foreground but that's just a matter of perspective, not of hierarchy. Come to think of it, would you call this a landscape or a portrait? It seems to me that, in this painting, the distinction between the two is always already effaced.

I find this painting a tad disturbing at first, perhaps, but finally exhilarating. It is post-human or pre-human or meta-human depending on your perspective. In this moment, it's all just forms. And what distinguishes the human form from, say, the land is its roundness. The human is not the top of the pyramid holding dominion over nature. The human is not the sanctified domain of consciousness, morality, intelligence. The human, rather, is that which tends towards curvature. This is not minor. Humans and land are not the same. But what distinguishes them is speed and shape.

Every image makes an argument. It takes up the world and massages it, plays with it, spins it, arranges it just so to make a new thing. Every image says, Here's the world. Some images are part and parcel of the state apparatus and hence regurgitate the already known, the existing structures of knowledge and power. Think about 99% of ads: the same old bourgeois family experiencing the same old emotions and activities. It's rare to see an ad and say, Uh, what the heck is that? Some images, meanwhile, are art and hence (re)create the world: Here's the world anew. Here's my world.

In any case, every image makes some kind of argument whether it likes it or not. Every image makes an argument about the nature of forms, how they come into the world, how they interact. Think about Cézanne painting fruit. He doesn't paint an outline and then fill in the pear. There is no outline. Or, as he says, there are multiple outlines. Cézanne begins from the middle — a dab here, a dab there — until the pear takes shape, as if from the ether itself.

There need not be an object for an image to make an argument. Color field painters and Abstract Expressionists make arguments, too. How do the colors work together? How do the remnants of form form? Is this a world of collision and bleed? Of monadic, Leinbnizian harmony in which everything finds its place without collision? Is there such a thing as foreground and background? Diebeknkorn gives us space and distance but still effaces the background/foreground distinction. This is different than, say, Pollock for whom it's all the drip of clinamen amidst space that moves in all directions.  Or Miró who sees a lively backdrop for odd foreground shenanigans. The there's Calder who puts the whole thing in motion.

A work of art is, literally, a point of view. To see an image is to see someone else's seeing, to see their perspective on the world, how they see things happening, at what speed, to what end. Every image maker is a cosmologist and a philosopher making bold claims about the very nature of all things.

Of course, as the viewer of the image, you have a point of view, too: a seeing seeing. Different perspectives see different perspectives. For instance, if you're well versed in the history and theory of art, you'll see different things — how this artist relates to that artist; how this one is taking up that one's project and spinning it about. Me, I'm no art historian but looking at David Hockney's multi-photo images, it's hard not to see it as a seeing of Braque's cubism. And that might or might not be interesting; it depends on what you find Hockney and Braque to be saying to each other.

The one thing you never want to do is read the walls at a museum. Oy vey. It's inevitably filled with historical data. The artists was born here. The artists would take long walks here. The artists's father beat him here. Such perspectives, such points of view, look over the image all together to find the artist. But when I'm looking at an image, I'm looking at that image, not at the artist. That would be a different image all together for which I'd probably engage a different set of criteria to judge. This is not to say that biographical material is necessarily boring. It's to say that biographical material holds no sway over my perspective on the perspective of the artist. Such meta-data, or other-data, is another image that may or may not inflect my point of view.

Now, arguments need be so rigid and bold as making claims about forms and ethics of forms. An argument any image makes lies in its affective resonance. This is the mood of my world! I used to find looking at Francis Bacon's images awful for this reason: I didn't want to see flesh falling from bones. But, eventually, I came to love to see the world that way, as a darkly funny place of flesh smears. Meanwhile, Miró gives us all silly stars and playful shapes, mostly exuberant and happy to be alive. 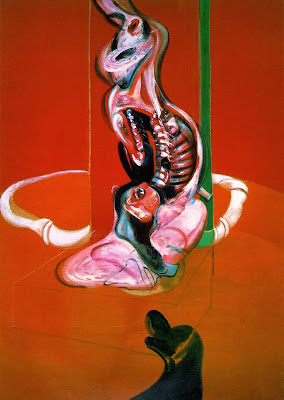 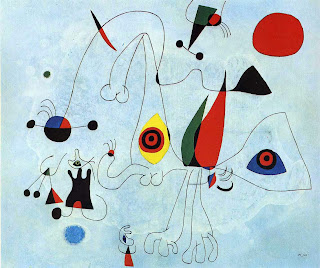 I taught critical theory for several years to MFA students — fine arts, not writing. And rather than have students write papers, I'd have them create art as their arguments about texts and ideas. I didn't have time to teach them to write. And while we tend to view writing as some kind of primary skill, it seemed unimportant to those making images. After all, art is quite an articulate mode of argument unto itself.
By Daniel Coffeen at November 28, 2013

1. Who is the artist of the first paining? I could talk for at least an hour about that painting. I love the playful green line both mirrors the yellow/blue and splits the mud/orange as the salmon line does in the background. I love how the curves on the human figure allow for the only highlighting from the sun. The right hand intrigues and troubles me to no end.
2. Have you ever had students create art as a pre-writing activity or create art and then have another student argue their supposed point and then have them discuss the interplay between the art and the writing?

Ah, that's Richard Diebenkorn. It's incredible, isn't it? Almost everything he did is incredible. And I totally agree: intriguing and troubling at the same time, in the best possible way.

Towards the end of my teaching, I began to have students create image essays: arguments using nothing but images accompanied by a one page written argument. I never quite mastered that assignment; I wish I'd pursued it more but, alas, my teaching came to an end. (I had them upload their image essays to Flickr.)

I also had them create an image, yes. I forgot about that until now.

Oh, and I also used a blog in which every week I'd post an image and every week every student had to write one comment about that image. http://seeingseeing.blogspot.com/. That was fun although not as effective as I'd hoped it would be.

DT - Diebenkorn (other than being a personal saint) so wonderfully evokes such a visceral sense of place - check out his Berkeley series and then, later, his Ocean Park (SoCal) series. Check out his "Notes to myself on beginning a painting." It's a poster on my office wall (next to one of his Ocean Parks). Yeah, rules for life. http://www.williamlanday.com/2009/06/23/diebenkorn/

Beautiful post, Daniel. It is really energizing to read a narrative connecting the painters you have here (Bacon baby!!!).

Make sure that both you gents check Twitter for a little "Sunshine" coming your way soon. E