In Defense of Watching Sports on TV, Especially Golf

First of all, let me say that many people I know, men and women alike, loathe sports — and really hate sports on TV. For them, it is a wash of banality, oddity, and ugliness. I understand this. This is especially true if you don't know the rules. Watching a game on TV without understanding its logic and motivations is an exercise in alienation and humility: people are making a sense I cannot possibly understand so either I'm stupid or an alien. In either case, I'm bored. And annoyed.

Then there is the terribleness of professional sport — the greed, phoniness, violence, machismo, rampant racism. Football, in particular, is difficult to watch for this reason, especially on TV. Television coverage insists on showing the rich, inevitably white owners in suits sitting in their luxury boxes as predominantly black men bludgeon each other on the field. And these white fucks fuck their players every chance they get. The average career of an NFL player is 3.3 years and, often, those 3.3 years leave the player hobbled for life without thorough health care. Meanwhile, NFL owners make gobs of money. The whole thing is grotesque. (Unlike in the NFL, the MLB — major league baseball — players' union is strong and takes relatively good care of its players.)

Still, I've been known to put this all aside and enjoy a football game. But only on TV. With dozens of camera angles that can zoom into the pack of action, with the ability to slow plays down and see them from seemingly every angle, I am suddenly privy to the miraculous. Huge, strong, fast, incredibly well trained men perform exquisite feats that make my head spin and my heart pound. A ball thrown on a dime, threading a fine needle between the outstretched hands of defenders, finding the enormous hands of a receiver running full speed. Cameras are able to parse the chaos of a football play with the rigor and precision of the most pedantic linguist parsing a poem. The elaborate mechanics and phenomenal prowess —from the linemen to the backs — spring forth in high definition.

I know some people insist that going to games is better than watching on TV. No doubt, it's a quite different experience. Live, there is the mania of the crowd. Which is why I hate going to live sporting events: crowds freak my shit. I find the collectivity of chants, moods, and behavior at once terrifying and, frankly, unpleasant. This is not to judge those who enjoy live sports; it is to declare my own paranoid sensibilities.

Now, I have been known to enjoy a live baseball game, despite the crowd. When I enter the stadium and get that first glimpse of the field, my heart quickens. The grandeur of it (it's huge!) and  the meaning inscribed in it (the diamond just so, the mound just so, the wall with its measurements written boldly) are lost on that tiny TV. And, as the game is big, TV can't possibly capture the subtle but relentless mechanics of the game — the infield and outfield shifts, the back up, the cut-off men.

But, to me, the most interesting thing about baseball is the pitching. And, live, you can't see squat. Ah, but TV shows you each pitch over and over, zooming in and out letting you see the spin, the cut, the speed. Live, baseball is mechanical (in the best sense). On TV, it's an incredibly tense and intense head game. Every pitch is an argument and the argument keeps changing depending on the batter, the score, the count. On TV, every at-bat becomes an elaborate rhetorical duel, a courtroom drama of epic proportion. 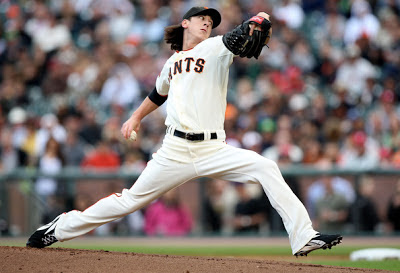 And then there is golf.  Golf, especially on TV, has to be considered the most boring possible thing.  But I have to tell you: golf on TV is a lot more exciting than most NBA or NFL games. And this is thanks to television and how brilliantly the tournaments are produced.

A golf tournament takes place over four days with a full round being played each day. This creates a proliferation — an explosion — of narrative threads. A round of golf is itself a storyline as the player negotiates the terrain and par. Each day, that same player negotiates the same course (more or less: the cup moves around a bit on the green day to day) and must adjust accordingly. So what was once an 18 hole narrative becomes a 72 hole storyline. And this is true for every player at the tournament, giving us dozens of parallel storylines. But of course these lines are not parallel as these players are competing. Suddenly, this series of linear paths drift sideways into each other, creating complex network of stories that rise and fall with every hole.

On TV, they don't follow one player through 18 holes. We don't watch a player hit then walk to the ball; consider it; hit again; walk to the ball. That would indeed be boring as fuck. No, on TV, they constantly cut to another player, another swing, which is at different points within different threads. The whole thing is like watching a Pynchon novel.

And it's exciting! Watching football, there is an incredible amount of downtime between plays; it can be soul crushingly boring. But watching golf on TV, everything is exciting because we are constantly seeing another negotiation, another reading of the terrain, each swing inflecting the individual and collective narrative, however slightly. It's constant action, I shit you not. In fact, as in a Pynchon novel, it can be dizzying.

Are there things about seeing a live event — an aura, a mood, a collective joy? Of course. But me, I'm a recluse who finds crowds off putting, to say the least. I like to pee in peace and without a line; I like to lounge and fondle myself absentmindedly. I like to eat my food and drink my nice booze in the comfort of my livingroom. But that's not really my point.

My point is this: TV today, with all these fancy shmancy cameras, reveals a detail and wonder to sport that really was never evident to anyone, not even the players. This is not say there was not always wonder. It's to say that TV brings another dimension of wonder that did not exist before. The medium creates the event.
By Daniel Coffeen at June 21, 2013

what the Tee Vee taught said...

Yeah, golf is wild, especially the last hour or so in the final round. I introduced this greatness to my wife, who now goes out of her way to check-in for a little golf every other weekend or so. Her parents find this to be insane. "Why do you care who wins?" is what they like to ask, super jerky-like. That the performance, rather than the result, is what we tune in for is totally lost on them. Poor bastards.

Very happy to hear your and your beloved's appreciation of tv golf. Few in my world share my taste. And those who see winners and losers are missing the boat.It's all in the going. Oh, yes.