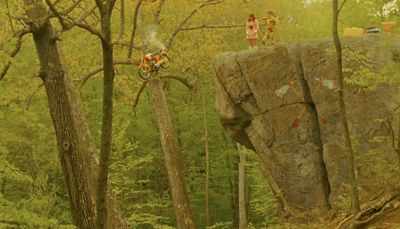 I finally saw Moonrise Kingdom — after the throngs were gone and I could have the theater to myself. And I found it extraordinary. Sure, there are at once too many characters and not enough — you want to know more about Bruce Willis' cop and less about Harvey Keitel. And the adolescent awkwardness is at once startling and doesn't go far enough. There is much to say on these matters, not to mention Wes Anderson's sense of the romantic, the precocious, adulthood and more.

But none of this has anything to do with what I loved and learned in this movie.  Moonrise Kingdom is cinema as machine — as engine, all moving parts, pulleys, and gears. Only it's not any old machine: it's a Rube Goldberg. Which is to say, it is a machine whose production is its mechanics rather than the end product: machine as means rather than means to an end. 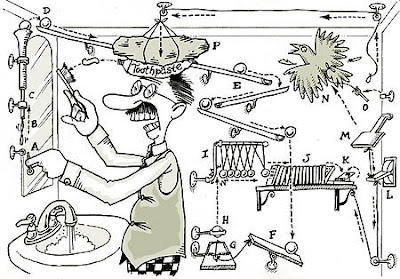 The camera in Moonrise Kingdom moves in highly contrived, deliberate motions. It lets us know it's there and that it's part of the action. This is made explicit once our quasi-narrator enters the fray, even flipping a light on the camera.

We learn quickly that the camera moves with purpose: it zooms from Point A to Point B to give us something. This is not the free flowing movement of, say, Cassavete's Faces. This is highly specific, functional movement, as if the camera were moving along gears and pulleys, part of the scene's — and film's — mechanical structure.The action in the particular scenes are localized contraptions that make the camera-pulley move to the next scene-contraption.

Often — too often — films are expository. Each scene tells us something we need to know about the story: someone did x; now they did y; and so on. Action moves according to a map.

But in Moonrise Kingdom, the film is the movement, like a Tinguely kinetic sculpture. 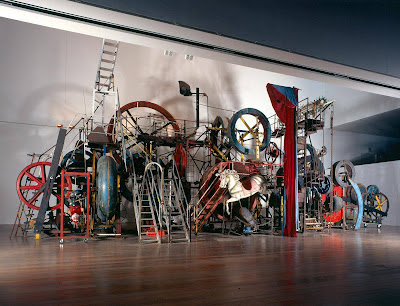 There is movement left to right, up and down, and affective, too. The plot is a series of triggers: Sam "flies the coop" which sets off the search which brings other characters into play which introduces new events.

This is, of course, what all stories do. They are little machines.  Just as a machine is a set of mechanical functions working in a conjunction of triggers and relations — pound this, wet that, move this along, flip it over, and so on — a story does a similar thing. It takes up different elements — characters, places, words — and creates a series of relations between them: John steps on Mary's toe; Mary feels bad, finds recourse with Lou; Lou feels gratified, dumps Greg; Greg goes to the mountain to find god; and so on. A story is a series of related functions: a machine.

Now, film is strange because it is literally a machine that makes stories (I suppose we could argue that language and paper is a machine — but that doesn't seem productive to me). Unlike writing, film moves and is visual which allows for more fluid and strange mechanisms to link things. Things can be visually linked — a blue thing can become an entirely different blue thing, a pointed thing can move into a soft thing or another pointed thing. And, as everything is in motion, movement on one side of the screen can move to the other side of the screen.

Like an industrial engine, a film moves creating all sorts of things as it goes — affect, mood, meaning, and most notably, light. What Wes Anderson taught me is that a director is a mechanic setting the speed of the pulleys, the turn of the gears, building the contraptions. For him, scenes are little machines, contraptions unto themselves, not illustrations of a story. They are not expository. Like a Rube Goldberg machine, they may serve a function within the greater narrative arc but it's the way of getting there that matters above all else.

This is joyful mechanics as distinct from industrial mechanics which is a foil of capitalist production — it always has an end. But a Rube Goldberg is not about efficiency; it's not about getting there. It's about movement — the joy of movement in and of itself, even if that movement is mechanical and not the free flowing wonder of clouds and smoke. There is a beauty and joy to Anderson's filmic mechanics: he loves to make things go in wondrous ways.