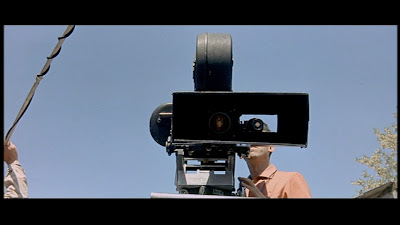 We've all had that moment, a distinctly modern moment, in which we say: weird, I feel like a camera. It happens usually when something else is moving us—  a car or train but occasionally it happens when running.

This calls out one of the strangest things about films: they move — and, even stranger, they move without being attached to a body. There was always movement in performance —  actors, singers, dancers — but cinema is something else all together: it is pictures of this world but its pictures keep moving and changing, just like so called real things!

But what is this sensation?  It's not just that we're taking in  movement (is "taking in" the right phrase?). It's that we're a machine, an apparatus. We feel as if we're no longer a soul driving a body but that, in some way, we are a body — a body that does all these things, a little machine that processes the world and makes shit, sweat, piss, words, gadgets, jokes, come, odors, dreams, that makes images. Descartes be damned!

This sensation can make us a little anxious but it is first and foremost exhilarating. As we become camera, for an instant we experience the speed, rhythm, and intensity of the world pouring into our heads, into our bodies. To feel like an apparatus is not horrifying, stultifying; on the contrary, it is enlivening, liberating us from the banality of ego.

The thing is, we are not just camera taking in the world. We are multimedia recording machines: we record moving images, sounds, physical sensations, tastes, smells. That world that pours into us in its sublime density of sensation stays with us, stays in us, becomes part of us. Just as we transform the food we eat into blood and bone and shit, we transform the images that enter us into blood and bone and mood and dream — and, if we're lucky, we shit some out.

Unlike the camera, however, we don't just record: we make sense. A camera is thoroughly stupid; it doesn't know a thing.  It can make sense of light, create focal planes, perhaps identify objects and faces. But it can't tell you what this or that thing is, its history or possible future, why and how it matters to anyone in any way. A human being, however, records and categorizes at the same time. We focus on this or that, ignoring some things while making the world of others. We prioritize. Which is to say, we edit.

And then we play it all back. Where? On the screen that is our bodies, that is our words and lives. We take in the world, edit it, then play it back on our face and fingers and flesh and feelings.

Our body-engines are complex. We take in and process according to infinite, singular algorithms of taste and knowledge and power and metabolism. This is why two people seeming to experience the same thing actually make two different films of the experience (the films are their bodies, their selves, their actions). We are style-engines.

We are not just cameras, then, and not just recoding machines: we are cinema engines.
By Daniel Coffeen at April 08, 2012