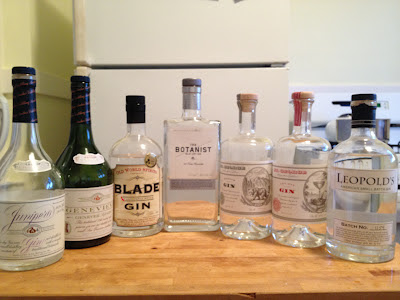 I've recently discovered gin. I drink it simply, over some ice, but these can all be enjoyed neat. Before you cringe imagining the soapy medicine of Bombay or Tanqueray, let me tell you that there has been a veritable explosion of gins as micro-distillers explore the possibilities of this elusive thing we call gin. And the results are, well, as surprising and varied as they are delectable.

The defining term of gin, as the etymology of the name suggests, is juniper. But other than that the field is wide open — from what other botanicals are used to the base itself which can be rye, grain, or grape or any combination thereof.

One thing I love about gin is that its recipe is so loosely prescribed. Tequila, my true love, enjoys great complexity but making it — like making most spirits — mostly entails steering the power of the plant from picking to aging. That is, other spirit makers tweak process and the way the materials break down, an art unto itself. But with gin, it is more a what than a how as the hand of the maker pervades. It is, indeed, a recipe and hence varies chef to chef.

Gin is explicitly interpretive of a category with few limits. While at first, this was the source of my reluctance — I suppose I was some sort of purist — it is now the source of my enthusiasm. With gin, I imbibe interpretations.

Now, the transition from tequila to gin was easy for me as there is a common spiciness and, when gin is done right, a certain delicacy — not to mention an ease of consumption followed by an easy next morning. The nature of this spiciness can vary widely, from floral to pepper to anise to malt. And there is an interesting component — indeed, history — of the therapeutic with gin: juniper was thought to heal, and it does. I love this aspect: booze mixed with herbs to remedy what ails you.

Here is a quick review of my current gin collection (pictured above):

Junipero: Made in San Francisco by Anchor Steam, it is old fashioned, whatever that means. It's tasty but packs a big juniper punch without a lot of subtlety or grace. It's open and round and bold. It's quality but doesn't make me weep — too uniform and punchy for my taste. But don't get me wrong: it's a good thing.

Genevieve: Also from Anchor Steam, this is an odd bird, a genever gin, made with malts from barely, wheat, and and rye. It's not clear like other gins. It's murky, viscous, that malt lending the ether of gin body, weight, and sweetness. It's not made to be mixed at all but enjoyed over ice. And, man, it grows on you and is a great transition gin if you're coming from whiskey. Surprising and delightful.

Blade: Another Bay Area gin, this one much more complex — citrus upfront and the experts say cardamom and I see that: there's a subdued brightness there that I associate with cardamom. It's neither dry nor sweet, neither peppery nor floral. It seems wise, balanced but still vigorous, if you will, and quite inviting without being needy. It's built on a mix of wheat vodka and a little bit of grape spirit. It's interesting but without being too adamantly odd. It may very well be the perfect gin.

Leopold's: From Colorado, I believe, and enjoys a distinct anise or licorice flavor that pervades.  Which has a very nice effect of having a hint of sweetness while being, in fact, quite dry.  It's completely devoid of both the astringency and the bouquet you might associate with gin so if you're hesitant about gin, this is a goody.

The Botanist: Made by one of my favorite scotch distillers, Bruichladdich, this is an Islay gin — which only means anything to scotch drinkers. It claims to have 22 wild botanicals and I will say it has a certain unwieldiness. It's more rambunctious than the others, careening here and there as it makes its way across the tongue. And yet it tastes more like what you think a gin should taste like, a tad astringent and hot. The effect is uncanny as the familiar gives way to the unfamiliar and back, over and over. In a way, it lives up to its name and bottle — it feels like it came from an apothecary. And it will heal your ills.

St. George Terroir: This is the gin that turned me. Made in Alameda, CA — near Oakland, no less — by the folks who make Hangar One vodka not to mention St. George whiskey, single malt, absinthe, and even an agave concoction. This gin is made, as the name suggests, with botanicals from one area — in this case, Mt. Tam in Marin. And, holy guacamole, it tastes like it. Crazy vivid, bright, clean, complex — the laurel sage and douglas fir shining through like a roll in the piney woods. Incredible from the nose on. For me, I tend to want something a bit more subdued but it is astounding and will change how you feel about gin from the very first sip.  I will admit that, sometimes, I dream about it.

St. George Dry Rye: A truly odd bird and ridiculously good. It's made with rye which brings its own peculiar mode of spiciness with it. And they claim to pack it full of juniper and yet its the least floral or botanical gin I've had. It's all dry black pepper.  Closer to the genever of the Anchor Steam Genevieve but without the cloying malt. This is an astounding spirit, in every sense of the word.
By Daniel Coffeen at March 16, 2012

What'd be your pick for someone who is quite new to booze connoisseurship? All I've tried is brandy (which was a little bit gross to my palate), rum (pretty okay and could drink it straight), and vodka (pretty gross though it gets the job done). I'd love to find something that I can actually drink straight without gagging. Is gin the answer, or should I look elsewhere?

I've only recently got into Gin after being a Scotch drinker for some time. Other than Bombay Saphire with tonic and two limes, my first taste was at Zam Zam on Haight. After asking for something local they mixed up a gin martini with No. 209. I wonder what you think of them?

Since then I've tried the Anchor Steam gins and liked them very much, and another I'll have to ask my roommate to recall the name of (from somewhere near Marin?).

Thanks for your response man - I'm totally jealous. I just don't live in a place that has these kinds of options - we have them with bourbon to some degree - with Scotch to a lesser degree - but in terms of Gin - we don't have anything in this ballpark - hell it's not even the same sport over on the East coast. Do you know the protocol for ordering booze across state lines?

@ Dr, first: This is the best booze shop in SF and they mail order to states where it's legal to do so: http://caskstore.com/

@ Justin: Here's an non-oddity oddity: at the precise moment I got your comment via email, I had just — just — ordered 209 for the first time. And I enjoyed it, although I'd defer to Blade or St George.

@ Umpolung: I think it's a hard thing to cultivate from scratch — it sort of comes to you out of a drive for a certain taste experience. But I'd begin with whiskey — single malt scotch and American rye (skip bourbon: too sweet). The question, of course, is what do you enjoy? Heat (high alcohol)? Earthiness? Sweetness? Spice? Try neat; add a little ice, see how it treats you — your mood, stomach, tongue, the next day.

But find that one thing you enjoy and then try things around it to get a feel for what it is you really enjoy.

Thanks for the suggestions, Daniel. It's spring break for us all week next week, so I think a trip to the liquor store is in order.

Gin was my first experience of alcohol. I grew up in a rabid born-again tribe where such things were verboten and was a true believer myself, so I took my first taste quite late, comparatively.

But my yard was separated from the street by a row of tall pines. My grandfather told me how sailors of old would stop on islands with pine trees to strip the boughs of their needles, due to their hight vitamin C content. They would fill barrels to chew on en voyage to avoid scurvy. This knowledge afforded one of my first opportunities for deliberate rebellion: when my mother would try to feed my brother and me our vitamins, I'd say, "no," and I'd win by displaying a pocketful of pine-needles that i chewed on nearly constantly.

So when I tasted gin a decade or so later, even a shitty gin, it was like coming home. I suppose it wasn't a real experience of taste, imbued as it was with nostalgia, but i liked it nonetheless.

I've since developed meaningful relationships with tequila, rye, and scotch, and I appreciate them all for different reasons. You're inspiring me to look back to that which I've passed over, Daniel, for which I thank you. I see some forests in the near future of my mouth.