Teaching the Way of Words

If words are not (only) tools to state facts and ideas but are themselves bodies that are as true and delirious as the world itself, then perhaps we need to rethink how we teach operating with words and how we operate with them.

Mind you, I taught comp at Cal for 7 years, more or less. I've seen what the kids of California have been taught about language, what they think counts as a good paper. Needless to say, I hope, this is not to knock my students of old. It's to knock the diverse powers that be who teach this nonsense.

Oh, man, I wish I had some say in the public school syllabus, in how reading and writing are taught. My goal would be to teach students to go with words, not just use words.  I would teach that words are not there to express truth per se but to express life itself in all its glorious messiness.


First of all, no more outlines. Outlines are hierarchies that reinforce the view that words are just there to give flesh to truth, to ideas.  Outlines show one logic, one way grammar — the grammar of hierarchy. And while hierarchy plays some role in thinking and writing, rarely is it a good master grammar. There are so many ways to present an argument, so many ways to make one's way through an idea or three, that to limit it to hierarchy is to limit thought itself.

Use, instead, what I call an argument map.  The emphasis here is on the flow between points, how you move from one idea to the next.  Notice that there's still some hierarchy as there's textual evidence for each point. But rather than cascading top down, this encourages a lateral movement through ideas. 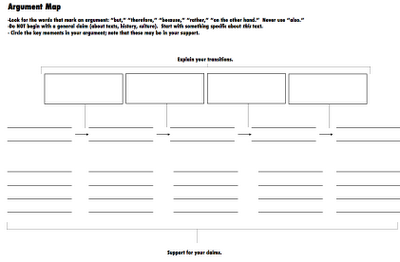 Freewriting.  This is such an excellent exercise. Give students a question, any question. And ask them to write immediately and without stopping for, say, 10 minutes or so. Oh, man, the prose and ideas that fall from their pens! All of a sudden, prose that was once stilted and awkward flows with vision and feeling. Ideas that were ill-conceived and half-baked take on a hue of wonder and discovery.

Read aloud.  It's important to understand, to experience, the sensual resonance of words. An excellent way of doing this is to read aloud. And be dramatic. Let the words move you. Let them choreograph your breath, your emotion, your rhythm.

Teach sense, not meaning. The brilliant Lohren Green argues that the dictionary is an odd beast: it delivers the meaning of all words in the same voice.  Butterfly, doodle, widget, concrete, robust, this are all defined in the same tone and timbre: cool, subdued, even. But does "any of numerous diurnal insects of the order Lepidoptera, characterized by clubbed antennae, a slender body, and large, broad, often conspicuously marked wings" really let you grasp butterfly?  And so Green wrote a different kind of dictionary, a poetical dictionary, that defines each word according to that word.  Bleak is, well, bleak; acrobat plants its landing; purple is verbose; glee leaps with delight; doodle meanders around the page.

To understand sense is to understand the many and diverse aspects of a word — its meaning, its connotation, its rhythm, its weight, its mood and character, its networks within language and beyond.

Imitate other writers.  This is a classical exercise: write as others have written and, in so doing, find your own voice.  I used to make students write like Ginsberg in Howl or Nietzsche in everything.  This shows you possibilities of language, what's possible, by making your body literally move through different mechanics, different senses.

Listen to other languages.  It doesn't matter that you can't understand the words, the meaning.  William Burroughs says the best way to learn a language is to grasp its rhythm — everything else will fall into place.  To begin with rules and meanings is to miss language all together.  To hear a language you can't understand is akin to listening to music — you hear rhythm and tone and sound, not concepts and referents.

I, for one, love American English because it can be soft — tuft, symphony, loquacious — and hard — book, finger, fuck.  French is so soft, all vowels, skipping quickly off consonants. This lets the French have a word such as jouissance but when it comes to angular anger, well, French must be content with a scowl: "va te faire enculer," while beautiful, just doesn't do what "you fucking fuckpig" does. There's that great scene in The Matrix 2 in which Lambert Wilson describes cursing in French as wiping your ass with silk.

The point, in any case, is this: words need to be reckoned, to be heeded, just as anything does. We have to learn to feel them in our mouths, in our minds, in our loins and bellies, see how they operate, hear how they resonate.

The argument map and listening to other languages were exactly what I was thinking of.
Argument map is especially important, I think, when one tries to argue in an unusual way. I actually think of drawing such a map when I am defending my thesis. Otherwise nobody would understand from where I am coming and on how many places I am while being seemingly just on one subject. There is never just one subject!

Thank you again and a million times for being so outloud for such hard to identify inner processes. Thank you for articulating...

Aysegul! Long time no, uh, see, as it were... The map served me, and hopefully my students, incredibly well. It eliminated the need for me to read their drafts: give me a map, I'd say, and I can see your argument in a flash, see your thinking. And that is incredible: to see thinking!

It's interest how time sometimes folds in on itself like Madeleine l'Engle's tesseract. I just listened to the part in the Berkeley lectures in which you, Dan, introduced the argument map, and I wanted to see it, so I Googled it and here you had posted it only recently. I'm not given to acknowledging my will to superstition (did anyone already canonize that will yet?) but I can't help but be amused at my own personal experience of those two events. The common perspective may be that you discussed the argument map three or four years ago and posted its corresponding visual only last month, but in my experience they happened today. I eat that stuff up, those temporal multiplicities. All this is completely OT, but it's in my head and Blogger don't charge none for pontificating too much.

My real comment is that the argument map is more like the front crawl, while an outline is more like a brand-new pair of cement shoes. One moves you laterally and gracefully through the waters of discourse. The other just weighs you down and takes care of someone else's problem.