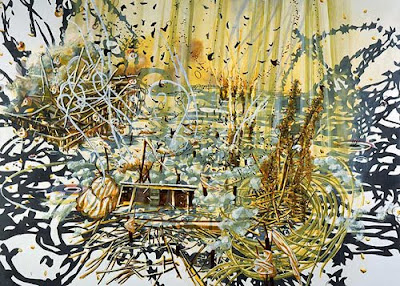 Making sense of the world from afar — sizing up a so-called political situation, interpreting a friend's girlfriend's motives, reckoning the Coen Brothers' "A Serious Man" — is no easy task. It demands a certain generosity, an openness, an ability to make multiple elements more or less cohere without reducing or simplifying ( hopefully).

Trying to make sense of the world from within the world — from deep within the proverbial shit — well, that is even harder, if not impossible. To me — and to most — it is incredibly obvious when a girl likes a guy, when a co-worker harbors deep seated angst, when a friend's friend is being a prick. But when it's me involved — when I'm the one who likes or is liked — I become flustered, confused, as stupid and lost as any moron (and I use moron affectionately here). I am blinded by the proximity.

Let's say I rant about this or that — say, San Francisco. Well, it's obvious that at some point my critiques are not just about San Francisco but about me in San Francisco at this moment. My position is just that — a position. I am — we are — always already situated. All writing is that position articulating itself, a position that includes the writer and his environment. Which is to say, all writing — all living — takes place in between, in that murky, beautiful, complex space between self and world.

Sometimes, this in between grayness becomes so murky I can't make heads or tails of what's happening. I see the complexity — I see all the different feelings I am experiencing; I see my history; my possible futures; my desires, at times contradictory. And I see her feelings, her history, her possible futures, her often contradictory desires. And I begin to drown and, worse, flail. It is humiliating for me — aren't I too old for this shit? — and it's not pleasant for anyone involved.

Life happens in this middle. As Deleuze and Guattari say, the middle is where things pick up speed. Sometimes, I am able to go with this middle, with this speed, to make it and be made by it at the same time and it is glorious. Other times, the tides overwhelm me. So what is it that separates these two experiences? What is it I'm doing when I go well and when I go poorly?

But is that even the right question? After all, this question assumes that it is me when, in fact, it is never just me. The in between — where life happens — is made of multiple strands each with its own speed, its own intensity, its own rhythm, its own metabolism, like a Matthew Ritchie painting. So maybe I can right myself amidst these waves but the waves keep coming and maybe, just maybe, it's her or the world that keeps knocking me down.

At which point, it would seem like it's time to bail. But heeding this moment — knowing the right moment, the propitious moment, what the sophists call kairos — is precisely what's so difficult when heaving and tossing about. 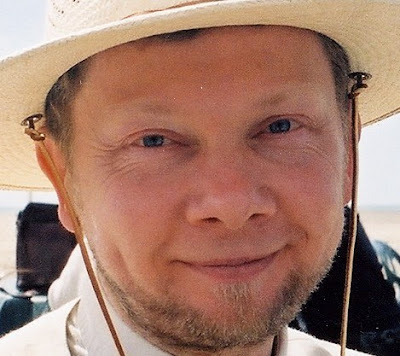 Perhaps, then, Eckhart Tolle — despite his creepy face and absurd beard — is right: stop thinking about it all and just be present right now, right here, right in the middle where life teems. Let it all wash over me. Let it all come down.
By Daniel Coffeen at July 07, 2011

It never occurred to me until now how tense the relationship is between the different meanings of the word "position": argument versus location. What kind of implicit argument is being made by their cohabitation in a single word? Maybe something about argument being temporal, and shifting based on perspective. I think also of "posture" versus "posturing."

I'm not sure I see the relationship as tense — a position is a perspective is an argument: it's a situated view of the world. I suppose the tension is, as you suggest, between the presumed fixity of position and the fickleness of argument. But position is in motion, too, as everything is in motion.

I gotta think about posturing....

You're right - I think I wanted to just say "interesting" rather than tense, but that felt, well, boring. Maybe I just meant "linked."

As for posture and posturing - so "posturing" emphasizes the whole fake/posing/putting someone on meaning of "posture." When you're posturing, you're putting something on over yourself, not just being what you are. Which seems to suggest a linguistic assumption that we're separate from the postures we take on.

But it's nice to imagine posturing as the verbification of the noun, a la Nietzsche.

I know it's not your main point, but Tolle is a charlatan. Forgive me if I quote from an earlier, much longer post of mine about Oprah's selection of Tolle's book for her Book Club:

"Tolle's big point in his book is that humanity needs to be awakened to a new heaven and a new earth. The seat of this awakening lies in the individual—opening the real you to the true essence of reality. It lies in what he calls in an earlier book "The Power of Now." Eschew the past, forego aspiration for the future. Accept what is—a very static vision. [A friend of mine summarized Tolle's "philosophy" quite succinctly thus: "Sit down, shut up, take a 'chill pill', and get over yourself."] In fact, Tolle's is an ethos of disengagement and self-satisfaction (only when you discover who you really are can you be truly happy)—which is all well and good if the world around you is a nice, sweet, comfortable place like Oprah's or her strongly middle- and upper-class congregation. But if the world around you is ugly, nasty, mean, and brutish, no amount of meditation will change it. No mental state (call it awakening, or positive thinking, or complacency, or contentment, or mindlessness, or a happy attitude) is going to get you out of it. One must engage the world, understand its dynamics, work for change—hopefully to make it better. Oprah Winfrey and Eckhart Tolle disagree. They advocate passivity, inward-looking; in effect, going to sleep. 'Being' not 'doing'. Don't believe me? Here's Tolle: "Enlightenment means choosing to dwell in the state of presence rather than in time. It means saying yes to what is:" Abu Ghraib, Iraq occupation, Afghanistan, Somalia, environmental crisis, political corruption, financial meltdown, ignorance, delusion, poverty, madness, etc. "Yes. Yes," Tolle says. "Accept those things. Turn off your mind. Don't form opinions about good and bad, right and wrong; simply accept things as they are."" http://wisdomofthewest.blogspot.com/search/label/Eckhart%20Tolle

@ Linz: I think you're right: the common reading of posturing as false is based on as assumption that there is a real beyond posture. So I like the Nietzschean reading.

@ Jim: Not sure I agree...The Power of Now, most of it, is rhetorically aggressive: we are all dangerously sick and insane, he says over and over again. I think the path to change is not just by fighting in the streets but by refocusing attention on the now. If everyone did that, then perhaps the world would be less violent, less consumptive, etc.

This is not to say that that is the only mode of revolution but it is essential.

@Jim: I've never read any Tolle, but your synopsis makes it sound a lot like amor fati - living an affirmative life. It's easy to mistake that for apathy, but I don't think that's what it is. Why can't one "engage the world" from an affirmative mental state? I find it hard to meaningfully engage the world from any other state.