Some of My Favorite Concepts: Repetition via Deleuze 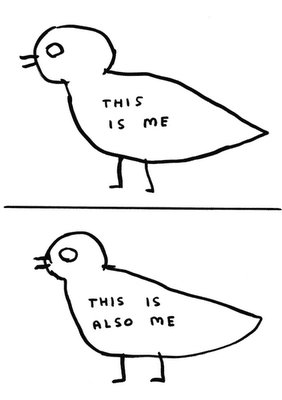 When I first read "Difference and Repetition," — I dunno, 17 years ago — I was so thoroughly confused I could not speak, read, or write for a year. But once I enjoyed a glimpse of comprehension, everything — and I mean everything — changed. Repetition is the defining concept of my adult intellectual life to date. Which is what Kierkegaard claims repetition is: to be born again and anew — an impossible, yet actual, undertaking.

For Deleuze, repetition allows us to think the relationship between sameness and difference without making one the derivative or disruptor of the other. That is, on the one hand we can say that I am a fixed self and all the different moments of me are accidental. Or I can say that all these moments are each a different me and hence there is no me per se: I am shattered and therefore there is no I.

Repetition allows us to think limits, forms, and continuity without identity. That is, repetition allows us to think a certain kind of sameness that is not opposed to difference. So rather than being stuck in an either/or — either I am a fixed self or I'm a series of disconnected moments — I am one who repeats. I am the act of repeating this, then this again and anew, then again and anew.

Each moment of me is me; each moment of this is this. None is privileged. But nor are they isolated: they are repetitions of each other, a taking up and reconfiguring of elements to make something new. I am this network of moments, this limit that is always becoming. When there's another me that doesn't seem to fit — well, it does fit: it recasts the network, redraws the limit (a limit that is a process, anyway, not a stable line).

Repetition displaces any call to an original me. It's not that it undoes the original (as Derrida's iteration does); it's that there never was an original: we are always already a repetition.

What does that mean? It means it's turtles all the way down. It means the world has always already begun, always already been repeating itself. (Foucault writes that when we look to the origin we find "the dissension of other things" — a line that has stuck with me for over 20 years.)

Consider the song, Satisfaction, by the Rolling Stones. Which version is the original? The one, probably never recorded, of Mick humming it to Keith? The one with Brian Jones playing harmonica? Is it the version they did live at this or that club? The 1965 mono single? Or the stereo re-release in the 80s? The song is always a repetition of itself: look for the original and you find a series.

Now add all the covers — Devo, Cat Power, Bjork with PJ Harvey, Britney Spears — and we see the song isn't tethered to its authors. It repeats. It keeps finding new life, new possibilities. We could keep looking back to some mythical original. But, with repetition, we look forward and see the song endlessly emerging, endlessly being reborn. There is no original, only versions to infinity and it is beautiful.
By Daniel Coffeen at February 17, 2011

Everything you write about seems to remind me of being a kid: my little sister used to sing the wrong words to Beatles songs. I'd say, "That's not how it goes." And she'd say, "I wasn't singing that song."

I think you're going to say something about how they go such different ways, and have such different moods. And they do, but so do the different versions of Satisfaction. My head is spinning.

Linz: A thing happens — a song happens. It is always happening, in some form or another. Forget the covers and ask yourself: Which version of Satisfaction is the real one? The original one? The answer quickly gives way to an infinite series with infinite permutations.

But that doesn't mean every version is a version. A version may break and join other series. The infinite is not general; it is always specific, as in a differential equation: this limit to infinity, not an infinite limit.

There should be a certain spinning, a certain vertigo, a certain delirious joy with repetition.