Where is our avant-garde? 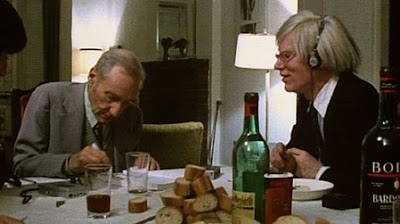 Marc Lafia has argued this to me: they're in Silicon Valley. In Lafia's generous reading, the avant-garde's interest in the instrument over content reaches its apogee with the algorithm and the app. Just as Burroughs created the cut up and Oulipo — Perec, Queneau, Calvino, et al — created the productive restriction, Silicon Valley created the means of putting on the world, the instruments to create and disseminate. Who needs Warhol's factory when we have Twitter? Twitter is the ultimate tool of pop art. Everyone's famous! Everyone publishes! And everyone can put on the world (forget, for a moment, what people do with Twitter; here, the tool's the thing).

The obvious difference between Silicon Valley and Burroughs' Bunker is that one fuels the capitalist engine and one threatens it (even if there is a publishing economy, it pales rather conspicuously next to Google). Capitalism got smart and it got fast. No sooner does the specter of an avant-garde appears before it is quickly folded into the engine. Think: Vincent Gallo hocking Belvedere Vodka and posing for H&M. 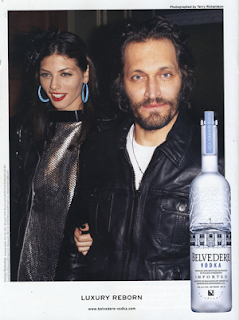 Maybe I'm missing something. I will admit I am not the most plugged in guy. Perhaps there's a burgeoning avant-garde that I don't know about because, well, I'm not cool enough. And you know what? That would be just fine with me.

But I fear that is not the case. I believe the latte has displaced the syringe as acid has been replaced by Adderall — today's drugs drive productivity, not mind trips. Today's avant-garde is doing yoga and rolling in money and probably wind surfing. I ask you this: Are we healthier for it?
By Daniel Coffeen at May 15, 2009

I don't have any answer, just wondering if the question needs to be refined: what work do you expect the avant-garde to do? Giving it the first thought I've ever given it in my life, I wonder if the avant-garde hasn't more often been identified by a cool mode of social performance rather than ethos and enterprise? Other than being lumped together in the popular conception of avant-garde, what do Burroughs and Warhol share: indeed, hard to imagine two artists for whom the term "factory" would have such radically different resonances, and Warhol certainly didn't share Burroughs abhorrence of capitalism; he may have spoofed and co-opted it, but in a way that met capitalist demands quite squarely.

That being said, if you are looking for a group that opposes/subverts capitalist modes of production and consumption, the slow food movement is something to consider. Joel Salatin, the self-described "grass farmer" in "The Omnivore's Dilemma," seems like he would have felt right at home having tea with Burroughs.

I want a group of smarty pantses who push and redefine aesthetic limits while enjoying a certain indifferent to capitalist norms. I'm not looking for resistance; I'm looking for radical productivity.

Maybe it's always there and it's only in hindsight that we make it a group and call it "avant-garde."

But maybe the society of the spectacle has become so swift that everything is immediately folded back in, sanitized, packaged, and sold.

I think V's nomination of Joel Salatin is actually right on the money.

A few years ago I started working at farmer's markets and during my time in this environment I have had the good fortune to meet some of the weirdest, most interesting, and talented people I've ever come across. It was entirely unexpected.

Many of these alt-farmers make some kind of bizarre sculpture out of discarded tool bits, hold political beliefs that are hard to categorize as either right or left, and have the internal motivation needed for both art and farm work.

I was never really looking for all of this in this environment (just a few more extra bucks on the weekend), but sometimes I feel as if I am going to look back on this time as one of those that people look back on and call "that time".

Chad: I like that a lot. It suggests that the avant-garde burbles within the cracks — at farmers' markets, in alt-communities around the world, perhaps around Burning Man, etc. That is, an avant-garde that could flourish like the Factory may not be possible but then we — or I, as the case may be — need to look elsewhere, perhaps right in front of my admittedly over-sized schnoz.

I think this relates, but I'm not really sure.

Re: your closing query:

When Guiliani-era NYC purported to clean itself up by shuttering the 90%+ of the smut vendors in Times Square, some part of the city's soul was killed along with it. Aside from the question of how can you be a self-respecting metropolis without a red light district, you felt like the ghosts of Burroughs and Huncke, contentedly dipping donuts at the counter of Ho-Jos, got a tragic, 1000-watt, NASDAQ-and-neon exorcism.

Crime and art are linked in more ways than "crime in an area makes for affordable rent for artists." Lawlessness - whether participated in or dwelt among - that can encourage fertility of thought. The Garden of Earthly Delights is decidedly more likely to yield genius than The Olive Garden (yes, I am proud of that one).

NY suffered a terrible and terribly emblematic loss, one I don't think it ever stopped to consider or would know how to account for even if it had.

Why avante-garde? Why the hell is it so important to have one, anyways? I know WHY it was important in its time, but why is it important now?

Untether the significance of some movement existing for the sake of serving it's own existence. Reminds me of when people say "what happened to doo-wop music? we don't have melody anymore"

Ideas exist as a balance of relevance vs. irrelevance. When irrelevance outweighs the relevant, it doesn't serve the people anymore.

Avante-garde had its time and place, and it served its purpose. Doesn't mean it won't come back.

That is the funniest article...I thought that the article was an article from the Onion.

Then I found out that the article took itself seriously. Wasn't so funny anymore.

That seems silly. It is like saying ‘Tupperware’ ™ was part of the avant-garde when all it does is store (and add toxic plastic chemicals into) crappy uninteresting (salt or sugar shock) food products.

I can see the significance of things like Google on the culture—but there are poetry/writing movements that are reacting to it. And, there sense of place is on the internet itself.

Flarf comes to mind—they use things like “Google Sculpting” to create poetry from words they found on google searches (they also write intentionally ‘bad’ poems). Also, there is a whole movement called Conceptual Writing that practices “un-creative writing.” Essentially, just repositioning texts that are already extant. Kenneth Goldsmith (the most known writer/artist in the movement) writes whole books that are nothing but “The Weather” or “Sports” …like the text from a local news broadcast. But then, he reads it a poetry readings. It is rather interesting/wonderful.

These movements often get clustered under the title of “Post-Avant,” which, no doubt, is strangely contradictory.

Also, many members of the Post-Avant have found a way around the massive costs and restrictions of the publishing industry by using a Print On Demand (POD) model. See BlazeVox books in Buffalo.


Check this flarf video out, I think you’ll dig it:
http://www.youtube.com/watch?v=HZI8DsouAK8&feature=PlayList&p=E20299DBC22BC3C3&playnext=1&playnext_from=PL&index=1

(She actually studied under Ginsberg, not that it matters…)