William Burroughs: These are my tools 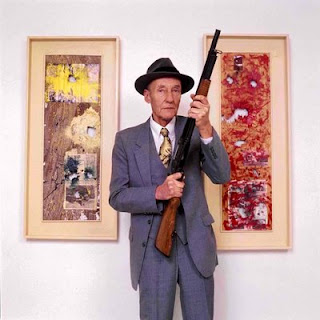 There are so many reasons I love this image. Look at his hands on the gun—this is not a prop. This is his tool. Some use paint brush. Not Burroughs: he uses a shot gun. But it's not with the affect of a punk; he's not flipping the bird and mooning the art world. No, with an air of absolute refinement, he stands resolute in the gallery, the artist standing before his art, baring his tool: a shotgun.

When asked once what he needed to write he responded that he needed his scrap books, a typewriter, and a pair of scissors. A pair of scissors—so matter of fact. The cut up technique is not a negation of the word, of narrative, of character, of literature; it is its liberation.

The cut up and shotgun art are not negative functions. They create new grammars, new possibilities of creation.