The Horror of the Image: On The Ring 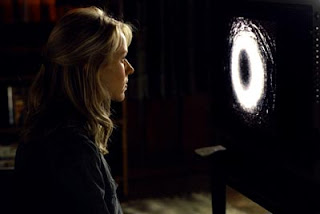 Cujo’s a dog. The blob’s a blob. Freddy is a dream of revenge. What is the ring? The answer is strange: it’s the image. The source of terror, fear, and death is the image. The Ring is an odd and surprising film.

Why, after having viewed the tape, does the phone ring? Because the phone call is an image. The phone rips the voice from the body, leaving a spectral trace, an imitation of the person on the other end: an image. When the phone rings in The Ring, then, it is not exterior to the visual image but is the image still happening. The voice through the receiver and the visuals on the screen are part of the same image. The ring of the phone is the heralding of the image.

The Ring proffers the great paranoia of the image. It looks like us, it talks like us, it seems to have emotions. Which is to say, the image has a life of its own—but without a body. It doesn’t sleep, it doesn’t eat, it can’t converse. In what is perhaps the creepiest scene in the movie, we see the girl-image under observation, never tiring, never shifting demeanor, never responding. Or, for that matter, becoming frenzied. This particular image may seem pissed off but under the grueling conditions of interrogation it doesn’t get more pissed off. The image is not reasonable and therefore is not unreasonable. An image, it just keeps repeating itself, yielding more images, as if from nowhere, from the play of light and dark that it is.

I can see why a parent might think such a child unruly. How can one discipline an image when it won’t listen to reason, when it just keeps on repeating itself? Cut off its supply of light, send it somewhere its sound can’t be heard: drop it down a deep well and cover that well up. Think of the posters for the movie—a ring of darkness, light just making its way through. This is the horror, light emerging from darkness: the birth of the image.

This girl-image was not born of woman. But then where did it come from? It wasn’t recorded; it is not a memory or record but is itself a living force. No, it was not recorded: it was always already born, the image of the family, of mommy-daddy-baby. In this nightmare, this paranoia, this cliché-image has only one directive: not watch me, not disseminate me but copy me, copy me over and over and over again without changing a thing.

But the image is not so easily bent to the cliché needs of the bourgeois family, the triangulation of mommy-daddy-baby. Look at the video in the film: it is avant-garde cinema. It moves across various planes, horizontal and vertical. There is no triangle here; Oedipus has exploded (pace Lafia). There is no story, no transparent metaphors. In fact, these images are dense, opaque, heavy with shadow and their insistent refusal to slip into a palatable narrative.

The film hence presents two fears, two kinds of horror, the double genitive: it is both the horror we experience of the image and the image's horror of experiencing us. There is our fear of the image, of its refusal to bend to story; so lifelike yet utterly devoid of human life, the image makes a most horrific servant and an even more horrific master. And then there is the image’s fear of the narrative, of the cliché that would break it, that make it bend to clear geometric shapes. Perhaps that's why it is so angry.
By Daniel Coffeen at February 25, 2007

Cool blog, man. Erudite without pomp, although your writing is always a bit too tart, too sweet for me, like biting into an apple after which you get that *zing* in the back of your jaw. Confectionary, like 'woah' (how Tintin's dog barks). Keep on *zingin'* em. I think they (those managers who have their ears to the ground) installed the whole j-pop section in Amoeba in SF in anticipation or consequence of you 'doing' yourself via text. Well, that's what I first thought of anyway.

I liked the blog. I liked the whole 'phantom toll booth' About Me part where you rattle off a series of things and write 'please,' like ordering off a menu. Well spoken.

Smart but ugly, _The Ring_ is most frightening in the encounters with visual-images, not aural-images, although the phone becomes feared. Perhaps this is why David Lynch is so successful: he ties visual and aural together. _The Ring_ subordinates the aural, oddly. But then again it is not your typical horror film, as you said in your introductory graf.

Its best feature may be its visual sense but the architecture of its plotting, circular (or even spiral) to the end, is a subtle coup. Events repeat themselves in the tape, in the mind; the film itself is a repeat, a remake, a copy. It's as if its makers saw the original Japanese version as an order to hit play and record again. However, I have not seen the original film (nor does this matter, really), so I cannot say for sure this is a plain copy. In fact, it bears the stamp of its director rather boldly in its fascination with filming water and its strong sense of genre (how horror's history, and its subsequent inherited tropes, informs this film). Gore Verbinski knows what he's doing when he's shooting a horse running loose on a ferry or Naomi Watts pulling a cord of wire from her throat.

One note, though: perhaps the image does not simply wish to be copied. Rather it wants to be watched -- of its own accord. It seeks a voyeur. It's kinda slutty. But its appetite for eyes is also an appetite for life. Being seen is being alive. Maybe it's angry cuz nobody wants to watch it as much as it wants to be watched. What's funny about that is the film itself is handsomely produced and polished, if riddled with ugly sights. Even the terror of the tape-images are good looking. Except, of course, that girl-image. She's worse than homely: she's plain filthy scary. No wonder she can't find a willing suitor. No wonder she forces herself on people. No wonder she stops hearts: she is not simply a horrific image, she is a horror personified.

Thanks for assigning nightmares.